Let the Chips Fall Where They May 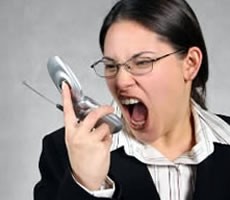 When I moved back to Ghana, one of the first things I noticed was that a lot of people carried two, sometimes even three, mobile phones. I’d go to someone’s office and see several phones set side-by-side on their desk. I’d be handed calling cards that had far more numbers than words printed on them. Seeing as how I’d never owned more than one mobile at a time, it was a bit confusing. Had mobile handsets suddenly become fashion accessories, like handbags and jewellery? Or was this trend simply another way for the affluent to flaunt their assets, to show off their shiny, expensive electronic gadgets? Why in the world would one person need so many telephones? I wondered.

Why indeed! I obviously hadn’t yet experienced the depressing inefficiency of the mobile phone industry in this country. However, it didn’t take long for me to get with the program. Within a few short weeks, the only thing that I was left wondering was why somebody hadn’t rounded up all those well-paid executives at the mobile phone companies, put them in a run-down trotro and driven them right out of coverage area.

But where exactly would that be? Despite those catchy radio adverts and fancy billboards that boast global expansion and the capacity to link users from any of the four corners of the country, it seems that everywhere in Ghana is a potential out-of-coverage area. The reality is, if you use your phone to call someone who is sitting in the same room as you, your chance of getting through to them is less likely than your chance of hearing a pre-recorded female voice reciting one of the following messages: You have dialled a wrong number; The number you have dialled does not exist; The mobile equipment is either switched off or out of coverage area. That is, of course, if the network is not busy, which it often is, even at an odd hour, like 6 a.m. when one would presume—since most people are probably still in bed, bathing, or too busy fighting their way through traffic to get to the office—that the amount of calls being made is minimal.

If you’re fortunate enough to actually get through, the chance of you then being able to carry on a conversation that will last longer than three minutes is relatively slim. The connection will either be too poor for you to get beyond “hello,” “how are you?”, “can you hear me?”, or the call will be dropped entirely. Just like that! Like somebody pulled the plug because they’d decided that what you were talking about was too meaningless to tie up a precious line in their limited system.

As if all that isn’t bad enough, (yes, it gets worse, because abuse of this nature never comes cheaply, you have to pay dearly for it; and pay, we do) the cost of mobile communication is unconscionable, especially given the service that is received in exchange. Whether it’s per second or per minute (which is all a psychological game of semantics anyway), the billing rates are outrageously high—for anyplace, let alone a so-called developing nation where so many citizens are already doing a hand-to-mouth dance for their bare necessities.

And the below-the-belt competition, as well as lack of cooperation and goodwill, between the mobile companies only hikes these charges up more. You certainly pay the price if you dial from MTN to MTN, or Airtel to Airtel, but try dialling from one carrier to another, from Tigo to MTN or Airtel to Expresso, and see how fast your units are chopped. It’s as though you’re being penalised for having the audacity to call someone who doesn’t subscribe to the same network you’re on.

Which is probably why those who can afford it opt to own more than one handset. They’d rather fork their cash out up-front and have something tangible, like a telephone, to show for it, than be suckered out of those cedis one quickly spent scratch-card at a time. For the rest who don’t have sizeable discretionary funds at their immediate disposal, the remaining alternatives are few.

One of those is the increasingly popular, though utterly criminal option of theft. More and more people—especially unsuspecting tourists who are under the sad illusion that it’s safe enough here to talk on a mobile while riding in a car with the windows open—are having their phones snatched right out of their hands as they cruise through the city streets.

There, too, is the option of flashing, which while completely legal is also completely obnoxious. Flashing, for the few who don’t know, is when someone decides that they want to talk to you but they want you to shoulder the financial burden of the conversation. Thus, they place the call but only allow it to ring for a second or two, long enough for their number to appear on your screen, in hopes that you will return the call. I never do.

Perhaps the most economical—and least offensive—option for people trying to ration their units is texting. The only drawback is that it’s not always reliable. It can reach the person immediately. But it can also be slow, sometimes taking hours, if not days, to reach the recipient. Sometimes it never reaches them at all.

Then there’s my least favourite part of texting—the tediousness of constructing a message in shorthand, so that it fits into the allotted space of 160 characters. Everyone has their own way of doing it, and half the time, I can’t figure out what those cutely abbreviated words are supposed to mean. It’s like trying to decipher hieroglyphics. I mean, really, what is this?: chale, how u dey? wz hping 2 c u l8r 4 lnch dis pm wil u b arnd o is 2mro beta?

There are days when I just don’t have the tolerance for any of it: the static-filled connections, the persistent flashers, the dropped calls, and the unintelligible texts. There are days when I pick up my phone and momentarily consider getting in touch with someone. Then I remember what I’ll have to go through and I think, Forget it. And the most annoying part of all is that there’s nowhere to turn for relief, no other company that’s offering us anything other than the same sorry situation.

So, what can we do—other than sit at our computers and write vitriolic columns—to turn the tide and make our mobile services truly reliable, affordable and cost-effective? Something’s gotta give. We, as a community and as consumers, really do need to figure out a way to bring about change and to protect ourselves from these shyster corporations. Frankly, I’m tired of the constant texts that are sent to me by my mobile carrier and wish that some regulations would be put in place so that I can opt out of being made a captive audience to their aggressive marketing plans.

But if that’s asking too much, then how about this: if these companies forget about all the bells-and-whistles features like those cutie-cutie ring-back tunes and they simply focus their efforts on not greedily oversubscribing people and clogging up the networks, and then they make sure customers’ phone calls are received and connected in such a way that their conversations can be carried out from start to finish! Now wouldn’t that be something wonderful?

This article is copyrighted creative property, NOT fair use material. All rights reserved. This article may NOT be republished or reposted without permission of the author.

“The View From Here,” a weekly column by Meri Nana-Ama Danquah, is published every Friday in the Daily Graphic. The author can be reached at outloud@danquah.com