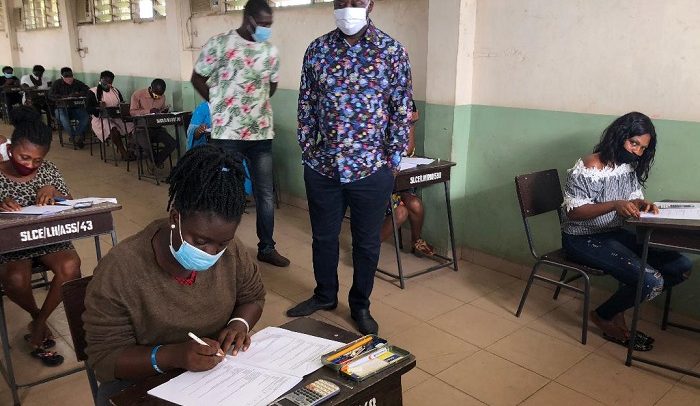 The Ranking Member on Parliament’s Education Committee, Peter Nortsu-Kotoe has bemoaned the devastating effect the Teacher Licensure Examination; a six-hour exercise has on young trained teachers in the country.

According to him, the Minority in Parliament holds the view that the programme in its current state aside from being frustrating is retrogressive and hinders newly trained teachers from bringing out their best.

It is for this reason, the Minority is demanding that the Ministry of Education and the Ghana Education Service (GES) “should as a matter of urgency suspend the conduct of any further Teacher Licensure Examination and rather review the curriculum for teacher education and make the licensure an integral part of the course programme as credit hours to be earned by students towards their certification.”

The Minority’s concern stems from the over eight thousand, four hundred and forty-two teachers who failed the mandatory examination.

According to a press release issued by the National Teaching Council (NTC) and sighted by JoyNews, this number represents 30.75% of the total 27,455 candidates who sat for the exams.

Some 19,013 candidates representing 69.3% of the total candidates also passed the exams while results of some candidates have been withheld pending investigation.

On the matter, the Education Minister, Dr Yaw Osei Adutwum has revealed that there is a resit for teachers who were unable to pass.

“Exams for teachers, licensing for teachers, and other jurisdictions are done for two reasons, same as here. The first one is to see to the quality of the teachers who are coming out and going to be teaching and within that context, since we have so many universities actually training teachers and colleges of education, private colleges of education, there has to be a common denominator, a one metric or exam that makes you know that they are all doing what is expected of them. The fact is we cannot lower the standard and even when the pass mark was lowered, so many failed in the exam and this cannot go on,” he added.

Meanwhile, the Minority has stated categorically that they are not happy with the maltreatment being given to these young men and women and therefore wish to empathize with them.

“As Minority, we wish to assure all teacher-trainees that we are with them in their struggle and wish to re-assure them that an NDC government on coming into office on 7th January, 2025, will consider the one-year off-campus teaching as a national service period as well as making the Licensure Examination part of the credit hours they have to obtain as they go through the course of study to graduate as teachers. These, we believe as Minority, can motivate the teachers to give off their best,” Mr Nortsu-Kotoe added.

He wants the automatic recruitment of teachers on completion of course of study to be re-instated so that the teachers do not stay at home unemployed and become an economic burden on their parents.

For the Minority, comments from President Akufo-Addo imply that the incumbent government does not have the best for teachers at heart.

“We have noted that this government does not have the welfare of teachers at heart. Otherwise, the President of the Republic would not have stated recently that the teaching profession was not one for people who wanted to be millionaires.

“What also broke the camel’s back was when the National Union of Ghana Students met the President to register their displeasure at the mass failure of the candidates when he failed to empathize with them but to agree with the Minister for Education that his assessment was the fairest. He failed to encourage them and made no commitment to seeing to a better licensure regime,” Mr Nortsu-Kotoe stated.

Regardless of the government’s position and the effects of the licensure exam, the Minority is encouraging teachers to “lift high their spirits and hope for the best in the future.”