A tourist has told of her "life-changing" visit to the Camera Obscura in Edinburgh after one of its thermal cameras detected she had breast cancer.

Bal Gill, 41, from Slough in Berkshire, was at the Camera Obscura and World of Illusions at the top of the Royal Mile with her family in May.

When she went into the museum's thermal imaging camera room she noticed her left breast was a different colour.

When she returned home she saw a doctor who confirmed she had breast cancer.

She discovered that thermal imaging cameras can be used as a tool by oncologists.

Thermography, also called thermal imaging, uses a special camera to measure the temperature of the skin on the breast's surface.

It is a non-invasive test that does not involve any harmful radiation. 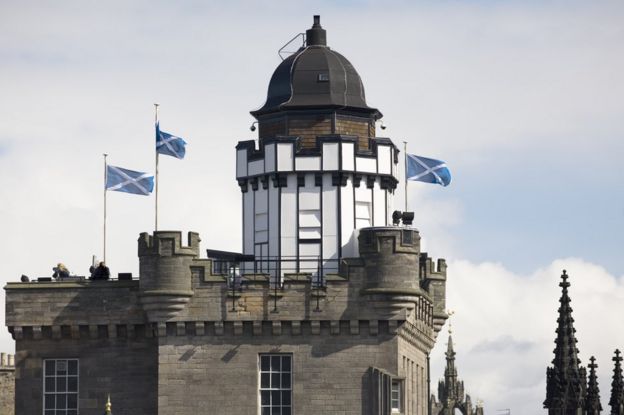 Ms Gill, a deputy-director of finance for a university, said: "We had been to Edinburgh Castle and on the way down we saw the museum.

"While making our way through the floors we got to the thermal imaging camera room. As all families do, we entered and started to wave our arms and look at the images created.

"While doing this I noticed a heat patch coming from my left breast. We thought it was odd and having looked at everyone else they didn't have the same. I took a picture and we carried on and enjoyed the rest of the museum."

A few days later when the mother-of-two returned home she was flicking through her photographs and saw the image.

On Google she found a number of articles about breast cancer and thermal imaging cameras. She was later diagnosed with early stage breast cancer.

She has since had two surgeries, including a mastectomy, and has a final surgery in November. She has been told she will not need chemotherapy or radiotherapy afterwards.

"I just wanted to say thank you, without that camera I would never have known," she said. "I know it's not the intention of the camera but for me it really was a life-changing visit.

"I cannot tell you enough about how my visit to the Camera Obscura changed my life."

The Thermal Camera, which was installed in 2009, is a popular part of the top Edinburgh attraction, and lets visitors see a visual of all their body hot spots.

Andrew Johnson, general manager of Camera Obscura and World of Illusions said: "We did not realise that our thermal camera had the potential to detect life-changing symptoms in this way.

"We were really moved when Bal contacted us to share her story as breast cancer is very close to home for me and a number of our team.

"It's amazing that Bal noticed the difference in the image and crucially acted on it promptly. We wish her all the best with her recovery and hope to meet her and her family in the future."

Dr Tracey Gillies, NHS Lothian medical director, said: "In the past thermal imaging cameras have been experimented with to detect cancer, however, this has never been a proven screening tool.

"Early diagnosis of breast cancer improves the ability to treat the cancer and the chance of survival is higher. We encourage any woman that has received an invite to a screening to attend and anyone with concerns who does not qualify for the screening programme to visit their GP."

My son benefited from GETFund scholarship – Asiedu Nketia confesses
Residents of Sunyani assaulted for defying funeral dress code
Court orders arrest of NPP’s Hajia Fati
Are members of the Armed Forces scuttling a $350m project on the Teshie Beach stretch?
How a Nigerian woman ended up married to two men