A teen's final days with the flu

Kaylee Roberts died days after becoming ill with influenza B.

On Christmas Day, 16-year-old Kaylee Roberts opened presents at her aunt's house in suburban Cleveland, joyfully celebrating the holiday and laughing with her cousins.

By New Year's Eve, she was dead.

That's how quickly the flu can kill a young person.

"She was a healthy, happy, normal 16-year-old," said Kaylee's uncle, Matthew Roberts. "We knew she had the flu, but we figured it would knock her on her butt for a few days, and then she'd get better. We were never expecting such a grave outcome."

Her family has started a GoFundMe page to cover medical and funeral expenses.

"It's such a terribly sad event," said Dr. William Schaffner, a longtime advisor to the US Centers for Disease Control and Prevention on infectious diseases. "But sometimes the flu captures a young person and in short order makes them literally gravely ill."

So far this flu season, 32 people under 18 have died of the flu, according to the CDC.

Kaylee had influenza B, the most common flu strain this year. Children and teens are particularly susceptible to it. 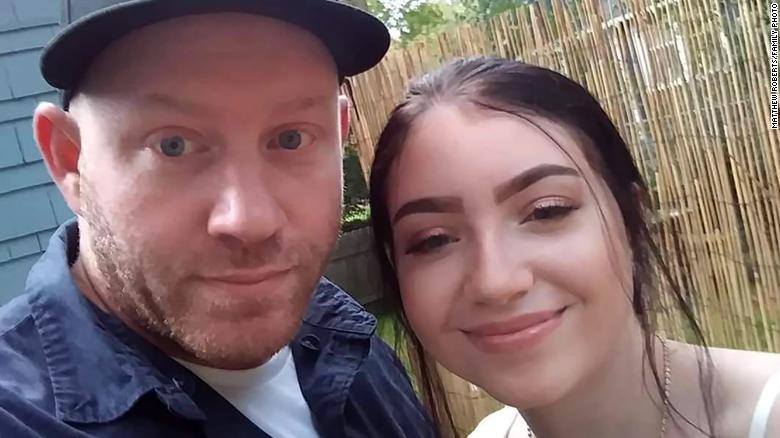 Chris Roberts and his daughter, Kaylee.

Kaylee's uncle remembers her as "intelligent, brilliant, and just a sweetheart -- probably one of the coolest, kindest people you'll ever know."

She cared about everyone, including her four younger siblings and her dog, Bruce. She sang in the school choir and loved the Cleveland Browns and playing Monopoly and Uno with her family.

Kaylee, who did not receive a flu shot this season, started to feel sick four days before Christmas.

Late at night on Christmas Eve, her parents brought her to the emergency room at a local hospital in Berea, Ohio.

Doctors diagnosed the flu and "ragged on my brother that she hadn't had a flu shot," Roberts said. The doctors prescribed Tamiflu, an antiviral medication. Since she was dehydrated, they also gave her intravenous fluids.

Kaylee left the hospital the next morning and felt well enough to go to her family's Christmas celebration at her aunt's house.

"She was coughing, and she looked sick, but just like normal sick," said Roberts, who celebrated Christmas with his niece. "I didn't look at her and imagine that she's near death."

The day after Christmas, Kaylee stayed home and rested. The next day, when she wasn't getting better, her parents took her back to the emergency room. They did a chest X-ray and her lungs looked clear, her uncle said.

Two days later, Kaylee was having trouble breathing, and her parents took her back to the emergency room. This time the hospital transferred her by ambulance to Rainbow Babies and Children's Hospital about 30 minutes away in Cleveland.

Chest X-rays there showed that her entire left lung and most of her right lung had been struck by pneumonia.

But Kaylee still felt well enough to shoot a selfie video a few hours after she arrived at Rainbow. In her Snapchat video, she smiled sweetly and showed the oxygen canula in her nose, the IV in her arm, and her cute pink pajamas with red hearts.

Kaylee comes from a large, loving family, and uncles, aunts, cousins, grandparents, her boyfriend, and her boyfriend's family came to be with her in the hospital. Roberts was among them, and when he left briefly at 10 p.m., Kaylee's father, Christopher Roberts, told him he should head home -- that Kaylee was doing OK and resting.

Six hours later, at 4 a.m. on December 30, Kaylee's father sent his brother a text: "They are intubating her. They're concerned about her breathing."

Roberts hurried back to the hospital. He found his niece on a ventilator and sedated and his brother standing over her bed. Nurses offered him a chair, but he wouldn't take it. They offered him food and water, but he couldn't eat or drink.

"He was so weak, but he just wanted to stand over her," Roberts said.

Kaylee got progressively worse. The next day, a doctor came in to deliver terrible news.

"The doctor said, 'I'm sorry, but there's nothing else we can do. She's gone,' " her uncle remembers.

"My brother called out, 'No, what do you mean?' He was screaming and moaning and yelling. I'd never seen him like that," Roberts remembers.

About 30 friends and family members gathered in the hospital room.

"We were all there when they took her off the machines," Roberts said. "I was trying to hold my brother up. He was breaking down because this was his baby. I was trying my hardest to stay strong and help him, but most of us just lost it."

Often we think of frail, elderly people as being vulnerable to the deadly complications of the flu.

Back in 1918, during the Spanish flu pandemic, young people had a particularly high death rate.

Paradoxically, their strong immune systems were to blame.

"Young, healthy people have a robust immune system, and in mounting a response to an infection, sometimes they simply can't put the brakes on it," explained Dr. Buddy Creech, a pediatric infectious disease expert at Vanderbilt University Medical Center. "We want their immune system to fight the infection, but when it happens in an uncontrolled or uncoordinated fashion, sometimes we can see a devastating response."

Of course, the vast majority of young people recover from the flu just fine. It's not clear why it goes wrong for some of them.

"I wish we understood why this happens so quickly in some teens and young adults," Creech said.

Schaffner, the CDC advisor and an infectious disease expert at Vanderbilt, said one of the things that's tricky with young people like Kaylee is that unlike adults, they can look quite well and be gravely ill.

"It's so deceptive. She's vibrant and young and healthy, and she gives the appearance of being much more well than she actually is," he said.

The best way to prevent complications of the flu is to get your child a flu shot. They can still get the flu after being vaccinated, but they're less likely to develop life-threatening complications from the disease. Although we're deep into flu season, the CDC says it's still not too late to get a flu shot.

If a child does get the flu, the CDC says emergency signs to look for in children include fast breathing, bluish lips or face and a fever above 104 degrees.

Schaffner added that any illness that gets worse after a few days is a warning sign, too.

"If you're at day four and you're clearly worse than day three, you have to worry," he said.

He added that sometimes everyone can do everything right, and terrible things can still happen.

"In Kaylee's case, it sounds like from the parental side and the medical care side, everyone was very attentive. But even so, you can still get this sudden crash," he said.