Most children sleep with mobile phone beside bed

More than half of children say they sleep with their mobile phone beside their bed, according to an annual survey of young people’s use of media.

The Childwise report found children getting mobiles at an earlier age, with most now having their own phone by the age of seven.

The average time spent on mobiles by seven to 16-year-olds is three hours and 20 minutes per day.

When phones are always so close at hand, as a “private and personal technology”, Mr Leggett says it can be tough for parents to put limits on how children use them.

The survey, based on interviews with 2,200 children in the UK aged five to 16, shows the pivotal place of the mobile phone in young lives.

There are 57% who always have the phone beside their bed and 44% who feel “uncomfortable” if they are ever without a phone signal.

There are 42% who say they keep their phone on them at all times and never turn it off.

Even though the average age of owning a phone is becoming younger, the step up to secondary school at the age of 11 is still the point at which many children get a phone and ownership becomes “almost universal”. 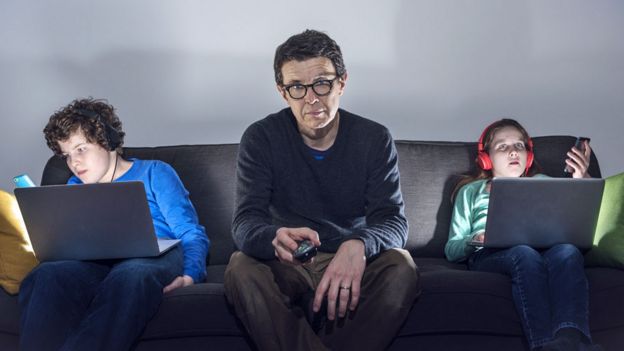 – Families are less likely to watch programmes together

For more than 70% of children, their phones will be connected to the internet.

Whether it is chatting to each other, watching entertainment or getting information, mobile phones are the main online gateway for young people.

The survey shows a media landscape dominated by digital and on-demand services.

YouTube, a veteran by online standards, remains dominant, used by 61% of children every day, mostly on mobile phones.

It is the favourite app and website of this age group, used as the most typical starting point for videos, particularly “funny” clips, listening to music, “how-to” tutorials or watching programmes. 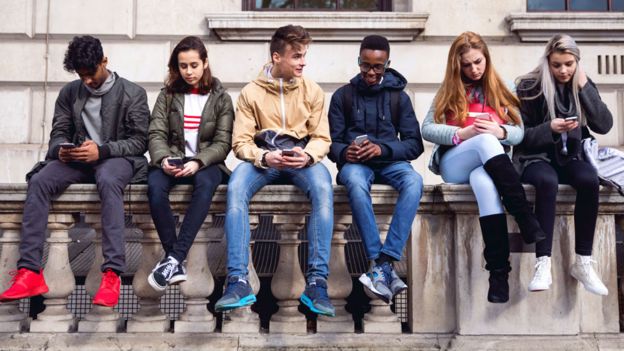 This is followed by Snapchat, Instagram and this year’s fast-riser, Tik Tok, with WhatsApp also among the most regularly used.

Showing the speed of change, Facebook is not even in the top 10 of favourites.

This is a resolutely online younger generation – only about one in five say they mostly watch programmes on a television set.

The science-fiction adventure series, Stranger Things, is the most popular programme on all channels, alongside long-standing series Friends and SpongeBob SquarePants.

For young Netflix viewers, Stranger Things is the top pick, along with Friends, Riverdale and Brooklyn Nine-Nine.

But for parents, research director Mr Leggett says the combination of mobile phones and internet access can make it difficult to know what children are watching.

“The moment a child owns a mobile phone, it can be a challenge to monitor what your child is accessing online because it’s such a private technology that most keep literally close to their chest,” said Mr Leggett.

2 Covid-19 patients at Old Fadama on the run