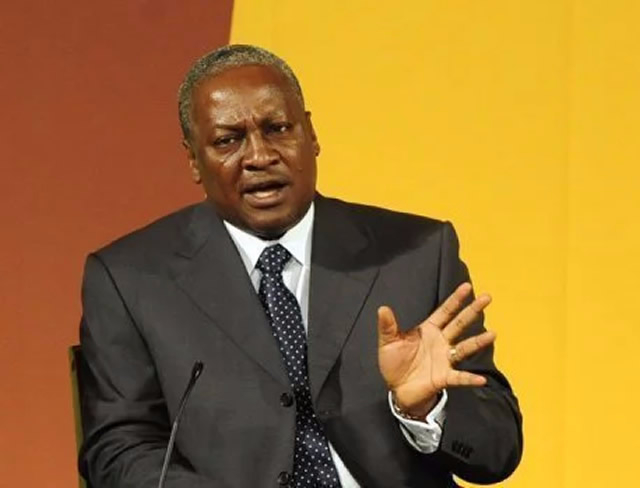 President John Mahama is the guest on state broadcaster, Ghana Broadcasting Corporation (GBC), in a one-on-one encounter to justify why he should be given a second term in office.

He is expected to address key issues that have bedevilled his government – with the economic challenges, unemployment, corruption allegations and power challenges featuring prominently.

He will also provide his vision and policies for the country if he gets another mandate to govern on December 7.

The only Independent presidential candidate, Joseph Osei Yeboah, has already taken his turn.

The Election 2016 Presidential Encounters is open to all seven presidential candidates contesting this year’s election and is an initiative of the state broadcaster with support from the National Commission for Civic Education (NCCE) and Star-Ghana.

It comes after a botched attempt by the Institute of Economic Affairs (iEA) to organise a presidential debate and evening encounters for the two leading candidates John Mahama of the governing NDC and Nana Akufo-Addo of the opposition New Patriotic Party.

Ghana has gone through challenges but much of the hard work has been done. Things are looking better. Ghana is moving in the right direction, key indicators show we are improving in all sectors — economy, health, education.

We are picking up speed, hence voting for the NDC government is ensuring that the momentum it has picked up is maintained for an effective second term.

During elections it is common to hear aspirng presidents make big promises, but when they win they usally see that the reality different. The president admits has done same before.

The decisons have been tough they have the best for the country.

"I have faith that God led me where I am" so His will be fulfilled on December 7.

GJA President Affail Monney inquires about the cause for the delay in the passage of Right to information Bill into law.

President says “Right to information bill will go down in history as the longest bill”.

He explains differences in opinion of the legislators on the bill has caused the delay.

Presidency has done its part. Parliament is autonomous. "I can’t force them to pass a bill. I have advocated for the passage of that bill." Right to information bill is important.

He admonishes the GJA to request an audience with the Speaker of Parliament to get clarity on the cause of the delay.

President Mahama begins answering the second round of questions from the audience: Security at markets during elections, prosecution of people indicted in drillship saga.

New markets are being constructed to provide security at all times not only during elections. Plans have been made to install CCTV cameras at all new markets under construction. These security features are very important to prevent market fires etc.

Testimonies at the Justice Apau Commission makes it difficult to prosecute some of the people found culpable but the government is committed to dealing with drillship saga.

Seeming delay in bringing some people to book is due to the constitutional process. The process requires the adherence to due process, coupled with human resource challenges at the Attorney General's Department.

President begins answering first round of questions from the audience: the implementation of the law for persons with disability, how to secure autonomy for public institutions and how the government intends to deal with grievances of workers of GBC.

Implementation of law for persons with disability

The government committed to dealing with challenges faced by persons with disability. Government has ensured the following:

3. Increase in grant to the disability fund

Autonomy of public institutions is important but this impeded by the need to ensure that the government's support with taxpayers' money is yielding results.

Public universities must accept the fact that if they receive a subvention from the government then there is a need for accountability. Accountability is not interference.

National Media Commission is best positioned to deal with GBC workers issues with Board of Directors. The law makes the NMC capable of dealing effectively with the issues.

The government has made investments in the production sector and in initiatives to create sustainable jobs. Ongoing economic progress will also open the way for more jobs. Takoradi and Tema harbour expansion projects have provided jobs to more than 2,000 people.

Youth Enterprise Agency is also spearheading the effort to provide jobs to the youth.

Also, government's module for Kayayie (head porters) that is aimed at improving their skills in the world of work or to become entrepreneurs themselves.

Youth Enterprise Support initiative, which has also made major headways in financing young entrepreneurs with viable projects, is another of government's success stories to deal with unemployment.

Brighter days ahead. By 2017 Ghana is going see accelerated. Challenges are 'labour pains' that will yield a better outcome.

There is a need for industry and academia to fashion out a more sustainable solution to unemployment.

Practical and vocational training is core to solving Ghana’s unemployment challenge and this has been the guiding principle of his policies. He cites the conversion of polytechnics to technical universities as his administration’s attempt to deal with unemployment and bridge the skills mismatch that stifles employment.

President Mahama begins with key challenges faced by his economy: Achieving economic stability, power and social and economic infrastructure deficits. These challenges are being fixed. Indicators point to progress.

"The critical challenge that every leader faces is the issue of job creation," and that is what his government is committed to solving.