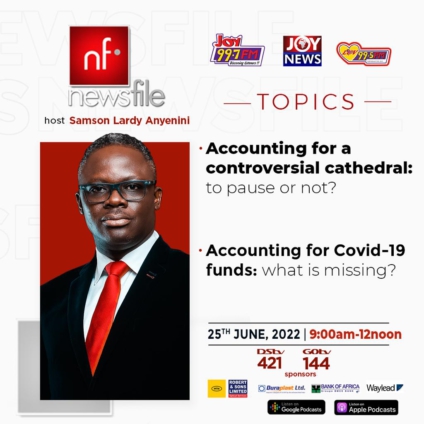 Today on Newsfile, host, Samson Lardy Anyenini, and his panel discussed issues of accountability surrounding the construction of the National Cathedral and the Covid-19 expenditure.

The Minority in Parliament has filed a motion for a probe into state funds invested in constructing the National Cathedral.

Ranking Member on Foreign Affairs Committee in Parliament, Samuel Okudzeto Ablakwa, believes that the probe is necessary due to what he describes as the “avalanche of putrefying rots and illegalities” perpetrated by the government in constructing the national cathedral.

According to him, President Akufo-Addo must come out publicly and apologise to Ghanaians, the clergy and the Christian community for the various controversies surrounding the project if he indeed deems it a “priority of priorities.”

According to him, the Minister in his address to Parliament on Wednesday, June 22, failed to include funds Ghana had received from several foreign states and institutions.

He noted that whereas these funds were captured in the 2021 Mid-Year Budget Review, they did not appear in the report the Minister read on the floor of Parliament.

“This Minister of Finance has failed to account for it woefully. It will surprise you to know, I have the mid-year budget review of 2021 before me, in the year 2021 the Minister of Finance said they have mobilized 19.3 billion and 6.2 billion. If you add these two together it’s 25 billion cedis.