A long-term ceasefire has been agreed between Israel and Palestinian militants in the Gaza Strip.

Hamas said the deal represented a "victory for the resistance".

Israel is to ease its blockade of Gaza to allow in aid and building materials, Israeli officials said.

Indirect talks on more contentious issues, including Israel's call for militant groups in Gaza to disarm, will begin in Cairo within a month.

The US gave the full backing to the deal, with State Department spokeswoman Jen Psaki saying: "We strongly support the ceasefire announcement."

UN Secretary General Ban Ki-moon also welcomed the truce. But in a statement via his spokesman, Mr Ban warned that "any peace effort that does not tackle the root causes of the crisis will do little more than set the stage for the next cycle of violence".

The breakthrough came as both Israel and the Palestinians continued to trade fire.

A last-minute volley of mortar shells from Gaza killed an Israeli civilian and wounded six others in Eshkol Regional Council, medics told the BBC.

Earlier on Tuesday, at least six Palestinians were killed in a series of Israeli air strikes in Gaza, Palestinian officials said.

Palestinian officials said Egypt's ceasefire proposal called for an indefinite end to hostilities, the immediate opening of Gaza's crossings with Israel and Egypt, and an extension of the territory's Mediterranean fishing zone. 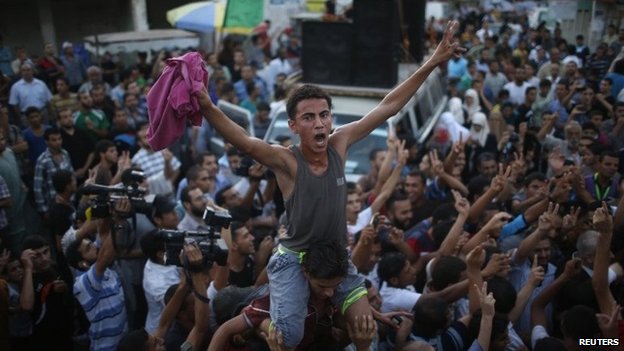 The ceasefire announcement was celebrated by Palestinians in Gaza City 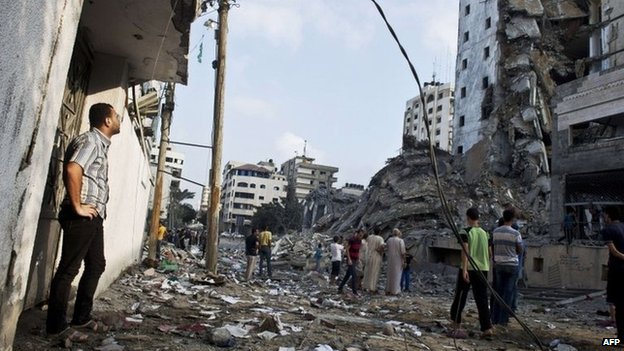 Before the breakthrough, high-rise buildings in Gaza were bombed and more rockets hit Israel 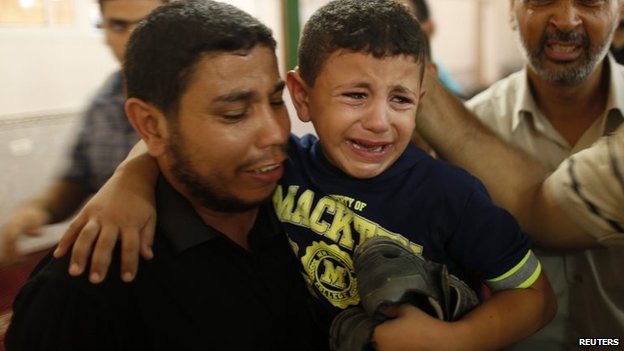 A month later Israel and the Palestinian factions would discuss the construction of a seaport and airport in Gaza and the freeing of about 100 prisoners.

Israel and Egypt were also said to be demanding guarantees that weapons would not be smuggled into Gaza.

The announcement was greeted by celebratory gunfire on the streets of Gaza City.

However, sirens warning of rockets reportedly continued to sound in southern Israel.