Lost in Translation – Reflections on how language, culture and information/technology gaps are exploited to allow an industry to exploit African children - MyJoyOnline.com

Lost in Translation – Reflections on how language, culture and information/technology gaps are exploited to allow an industry to exploit African children 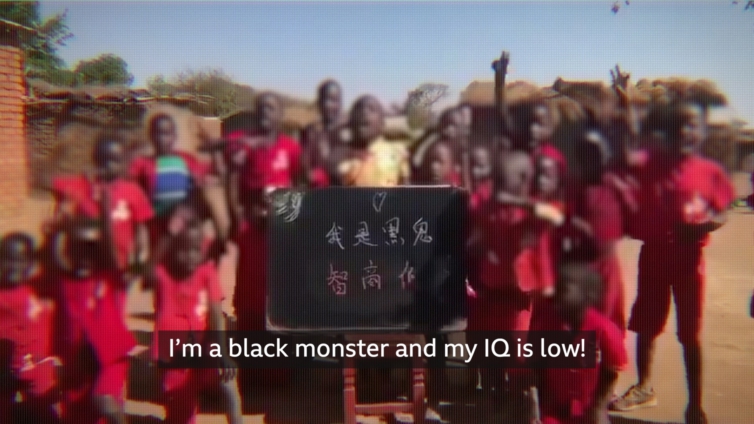 There’s something inherently sinister in swanning into a village somewhere in Africa, tossing a few coins at people less privileged than you and being able to instruct them to do whatever you want.

If the price (or pay-off) is high enough, or the sense of humour crude enough the possibilities are endless.

It’s this exact boundless freedom, plus a deeply ingrained racist ideology that has made an online Chinese industry I’ve spent the last year investigating possible.

The concept behind this industry isn’t such a foreign one – you pay to receive a video of someone from a land, world or reality far away from your own reading out a personalised greeting – made just for you.

Perhaps it’s your favourite actor from the noughties, commissioned to wish you a happy birthday. Or maybe it’s a greying politician congratulating you on exam success! It’s big business and designed to connect ordinary people to the public figures they admire.

But the stars of this particular online show aren’t celebrities. They’re Africans. Men, women, and most disturbingly children.

Collage of the African videos

For half a dollar a day, children are made to film such videos. They’re then sold for anything from 10
to 70 usd per 30-second video.

As a customer, you simply submit your order and requirements to the video maker or one of his
numerous agents in China:

‘This video is for friends who are about to get married, I hope the children can be energetic/pumped
up! They shouldn’t shout the last line’, one such order reads.

To me, it’s a human zoo of sorts, reimagined for this new, digital, socially-distanced age. Where
humans, from elsewhere in the world can gawk at the foreignness and often visible poverty of the
Africans featured – all through the comfort of their iPhones and favourite social media and
messaging apps. It places a distance between customer and costumed-performer that allows the
former to avoid questions about the morality and regulation of this trade.

But in February 2020 one particular video exposed the even uglier underbelly of this industry.

A group of 15 or so African children are dressed in red uniforms, standing around a blackboard
bearing a Chinese phrase. A voice, off-camera, then instructs them to repeat this phrase in Chinese:
“I’m a black devil,” the kids chant, still smiling happily, “and my IQ is low!” They’re then made to
cheer a celebratory ‘yeahhhh!’ and flail their arms before the video comes to an end. If you’re
reading this, I implore you to open a new tab, and google the word ‘Hei gui 黑鬼 – it can be
translated as the Black monster or Black devil, but in practice, it’s no different in intended use to the N-word.

‘This is too far! Stop buying these videos’, one Chinese commenter raged. ‘Hahahah this is too funny’
another laughed.
One of the versions of this video racked up over 3 million views on Weibo in days.
On an internet as heavily censored as the Chinese one, racism strangely seems to evade such
restriction.
Not that anyone who can’t speak the language would know. It’s this cultural and language gap that
has allowed this content and others similar to it to flourish, unobstructed since 2015, despite the
protests of Africans in China and concerned Chinese netizens.

With BBC Africa Eye, I investigated the origins of this video, who made it and where. Analysing
hundreds of clips to find out more, our team were then able to geolocate the exact location these
children had been filmed at – a village on the outskirts of Lilongwe, Malawi.

The bulk of the content filmed in this village had been uploaded to Chinese social media platforms by a man in his 20’s called Lu Ke. He was known locally as ‘Susu’, and had become one of the most prolific filmmakers in this industry. With the help of an undercover reporter, we got closer to this man, finding out more about him, and eventually gathering evidence suggesting that he was responsible for this video.

When I finally got the opportunity to confront him, I hoped speaking in his own language would be
enough to invoke some remorse – or at least honesty.

I remembered a video in which he’d made two young girls from the village kiss on the lips, before
turning to kiss the camera.

Or the one in which he’d told the kids to promise to never come to China, a nod to the surprisingly
the widespread fear that China’s increasing courtship of Africa will lead to an invasion of dark-skinned
Africans, blackening the Chinese genepool.

Susu denied everything we put to him and was keen to clear his name – this wasn’t exploitation,
he’d fed the children and their poor families, and taught them Chinese culture – this was all ‘good
will’.

He made an even more farcical claim – this was all inspired by his country. He explained that China
(the mother country) was coming to ‘help’ Africa, so its citizens, like him, were naturally following
the same initiative.

I was struck by his desire to link his own individual actions to those of his country. It’s something I’d
tried to avoid doing myself – I’d never seen China as a nation endorse this industry. But Susu
seemingly saw no such contradiction.

Time and time again, he’d play on his domestic audience’s strong sense of national pride to garner
support for his content.

To them, his content showed him doing a good job representing China overseas and spreading
Chinese values. In this sense, I could see how his followers were also being deceived.

Satisfying isn’t quite the word for how it felt to see the power dynamic Susu had carefully curated
over his years in this rural village, all come tumbling down in less than half a day when we
confronted him.

But when Henry Mhango, my co-reporter and I left the village, my mind couldn’t help but wander to
the other operations being run elsewhere on the African continent.

This glimpse into one operation, by one man, in one village left me with one main observation.
The problem with this industry is so much bigger than Susu alone.

I lived in China for six of the best years of my life. In many ways I feel I grew up there.

But I would be dishonest if I didn’t mention the racism I, and many other Black people in the
country, faced while there. In my second year, I made what would be my first and (trust me) last trip
to a zoo in the southern city of Guangzhou.

Imagine my horror when stood by an orangutan enclosure, I turned around to realise that I had become the main attraction. Some of this curiosity was innocent – you don’t live in a country with as tiny a Black population as China and not expect to arouse some local interest.

But understanding what was being said about me, punctuated by the click and flash of the phone
cameras made this interest hard to excuse.

‘My god, she’s so black, [she] doesn’t look good…but I like her hair…do you think its real?’

‘Hahahaha, she’s looking at her fellow monkeys’. Just like that, I’d become the exhibit.

In China, the majority of people know very little about Africa and its people – their primary point of
reference will be media – mainstream, most traditionally, but increasingly social media.

It’s easy then to see why, beyond the horrific exploitation of the children in this industry, this
content is also so problematic for Africans living in China. It has a direct impact in the way they are
treated and talked about.

Content creators like Susu are able to position themselves as authorities on Africanness. They,
collectively, are in complete control of the narrative they choose to spin – and to anyone who knows
no difference, this then becomes an acceptable truth.

If Susu’s disclosures during our undercover journalist’s meeting with him are to be believed, Black
people are a dancing, smiling, obedient race of people – with a proclivity for theft, lies and immoral
behaviour.

Is he aware of the narrative that his content plays a role in creating about Africa in China?
I found one of his comments online particularly enlightening.

In fact, many places in Africa are very good [laugh emoji], but none posts it’

You’d think, given this controversy around the ‘Low IQ’ video, the industry that made it possible
would have long since imploded and men like Susu forced out of business.

But as I type, this industry is being propelled to new heights –finding its way into new Asian markets
like Japan, and creating new formats and features to keep up with the constant demand for
innovation and excitement that social media often demands.

Today, if you type, ‘Feizhou/非洲’ the Chinese word for ‘Africa’ into search bars on international
social media platforms like Tiktok and Instagram, you’ll find these videos, even sometimes garnering
millions of views.

I should say, there is no indication that the African adult participants in this industry do so under
duress. They, like the children, are compensated for their time and they form a large part of this
industry. But having witnessed the inner working of one operation first-hand, and with an
awareness of this racial context within China, I still wonder what they know about how and why
their image is used, and just how much profit is made off their labour.

Yet, this industry and the content in and around it still exist. Are we now ready to have an honest,
open dialogue about anti-Blackness – which is a global problem – but which manifests in very specific
ways in a Chinese context? A discussion that presents a nationwide reckoning on the table as part
of the solution?

Without it, I fear that the specific brand of racism that has underpinned the exploitation of African
children in this industry will only continue to be one of China’s biggest exports.

Runako Celina is an investigative journalist for BBC Africa Eye and BBC Eye.