Luis Enrique: Barcelona not getting carried away before final 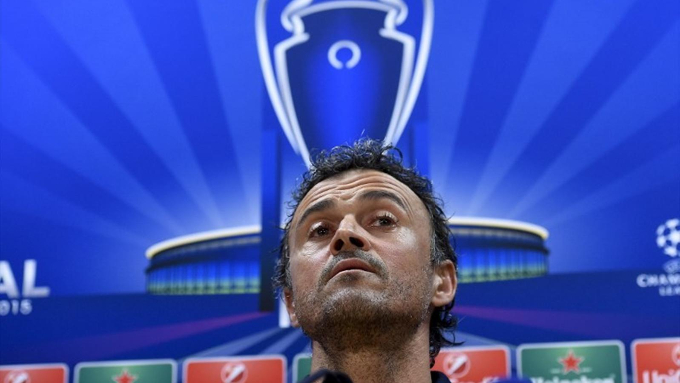 Barcelona are not getting caught up in the euphoria of their fans as they prepare for Saturday's Champions League final against Juventus, coach Luis Enrique said on Friday.

Barca supporters are on a high after their team wrapped up won the La Liga title and King's Cup last month with the club now on the verge of repeating their historic treble from 2009.

The Catalan giants are favourites to triumph at the Olympic Stadium but Juve showed what they are capable of by dispatching Barca's rivals and holders Real Madrid in the semi-finals.

"The fans are euphoric and we are delighted with that," Luis Enrique told a news conference.

"But as professionals we will approach the game with the utmost seriousness. "We will need to have a good day to get past a rival of this magnitude," added the former Barca and Spain midfielder. Luis Enrique, who is in his first season in charge at the Nou Camp, said midfielder Andres Iniesta should be fit for Saturday's match after an injury scare this week.

Spain midfielder Iniesta will be expected to help unlock a stubborn defence, though Juve's chances have been hit by an injury that has ruled out influential centre back Giorgio Chiellini.

"I want to have the ball more than them, occupy their half and play at a top level but we are sure to have some difficulties," Luis Enrique said.

"I don't think it will be a clash of styles as they will want to have the ball too. "They have resources and that's why they are also in with a chance of a treble."

Like Barcelona, Juve have already won the domestic league and Cup double this season.

They will be appearing in their eighth European Cup final and are chasing a third triumph. Barca have also played in seven finals, winning four, and are bidding for their third triumph in seven years in Europe's elite club competition.