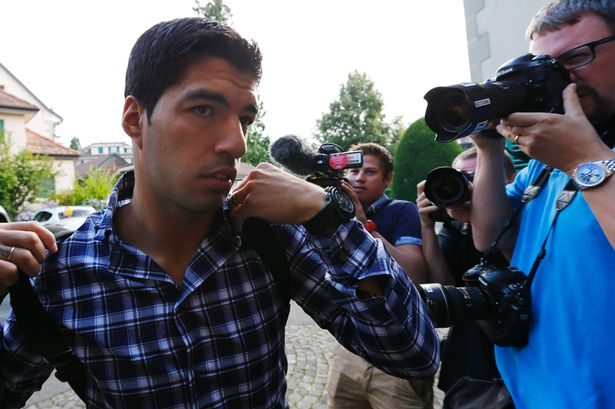 Luis Suarez has a habit of not being able to keep his mouth shut about things he should keep his mouth shut over, both for his own sake and that of wider football. The footballer, now at Barcelona, was found guilty of racial abuse toward Manchester United's Patrice Evra and served one of his many bans after the incident.

The whole thing dragged relations between Manchester United and Liverpool down to a new low with tensions rising hugely when the sides faced each other.

With Suarez since dropping Liverpool like a hot rock as soon as Barcelona came in for him and Patrice Evra moving to Juventus to get first team football, things should be a little calmer before the match between the two rivals at the weekend. The build up will be more about the football importance of the match to both clubs and both managers.

However, Suarez has done his bit to make sure he isn't forgotten. Speaking to Catalan newspaper Sport he was what he thought of his reputation as a bad boy and whether people had been out to get him, Suarez replied "So far I've had to accept to be accused of racism without any evidence of what happened with Evra."

Suarez also said that he had also wrongly been labelled a diver and criticised for his theatrics on the pitch. Strangely, considering there's piles of video evidence, Suarez doesn't even accept this and accuses those of complaining of antics of "lying".

Barcelona press will always ask about the Ballon d'Or with players from the club almost contractually obliged to big up Lionel Messi and criticise Cristiano Ronaldo, Suarez said to this "For starters I am not yet clear whether it is from June to June or January to December. Leo reached the World Cup final, Neuer is world champion, Cristiano by contrast was eliminated in the first round.

"Cristiano won the Champions League but finished third in the league, while Neuer was champion of the league. After so many months with many goals, it's amazing that people do put give Leo Messi as the favorite. What is clear is that there are different campaigns in place."

Isn't that right Luis, and if your man doesn't win it just won't be fair, and the whole things will be against and it'll be unjust and… the continuing life of Luis Suarez.