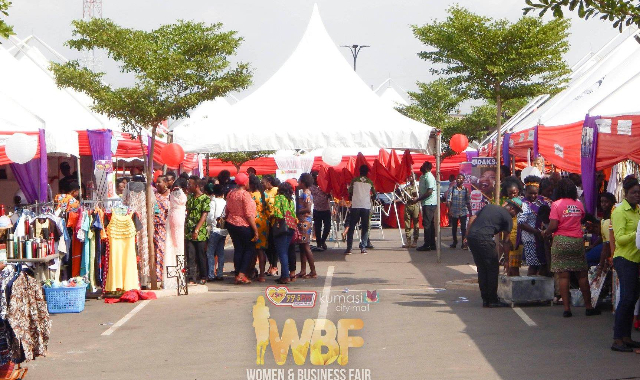 Women from all fields of endeavour have converged at the Kumasi City Mall for the LUV FM Women and Business Fair.

The event, which ends on  Sunday April 14,2019 is aimed at creating  platform for women to share experiences and networking for enhanced empowerment .
It is the first of its kind in the region where women who are captains in their various fields of endeavor gathering to reach out to each other.

Participants are  drawn from traditional authority, academia, public service, commerce, entrepreneurship, sports and entertainment, among others are gathering for seminars, exhibition  mentorship sessions.
It follows the on-air launch and subsequent hosting of  programmes on Luv Fm by selected women.

Host of Social Magazine Show on Nhyira Fm, Mama Efe Amanor, who stood in for the General Manager of Multimedia Kumasi at the opening ceremony asked for  support of residents of Kumasi  to make the event a success.

On her part, Founder of Jackson College of Education, Theodosia Jackson, want  the women not to look down upon themselves.
According to her, women were endowed with a lot  talents at creation which are yet to be unearthed.

"Technology and any new thing has more gadget than old things. God put a lot of things in us than the men so we must work hard and unearth those things."

CEO and Founder of the UNIJAY Fashion, Janet Abobigu is convinced the business world is run by women entrepreneurs.
She wants women to focus attention on skill acquisition which she  compares to currency.
"If it is school, please do.Opportunities abound so we must take advantage of them as women and stop looking down upon ourselves. Don’t look down upon yourself and say your parents are poor. Please try and do something for yourself, "she said.

'Women are no more champions of the kitchen'

Mampong Sanaahemaa, Nana Akyaa Danquah II who put icing on the cake is asking women to challenged themselves to making positive impacts in society.
She insists the era where women proud themselves as being champions of the kitchen is over.
She believes women embracing  modernity as a gift could improve their lot.

“Women back in the day were reduced to be the champions of the kitchen but it is no more these days. We must count ourselves blessed that we are part of this generation of Women of substance, skill and knowledge.”

Her call was supported by Dean of Students at the Garden City University College, Christa Osei-Mensah.
She challenged the young women to strive to make positive influences in their communities .

“Whatever you are doing, I am encouraging you to have positive influence. Learn from people who have excelled. I challenge every young woman here to start something, and with determination, perseverance and assertive.”

Women Banking Unit of headline sponsors, CAL BANK has been explaining  their scope of responsibility  to provide financial support to  businesses owned by women.

After the launch came  time for exhibitors to showcase their products and services  to thousands of patrons.

Entrepreneurs ranging from food to clothing have the opportunity to sell out  at discounted prices from now till Sunday when the fair ends.