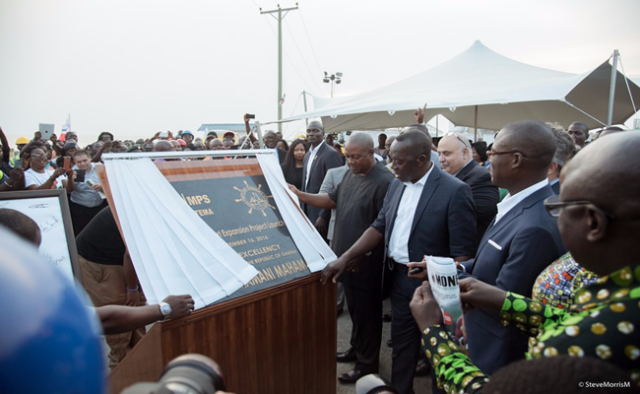 President John Dramani Mahama has unveiled a plaque to mark the beginning of major expansion works at Tema Ports, near Accra.

The project involves an upgrade and expansion of Ghana’s main seaport. The project is a Public Private Partnership between the Ghana Ports and Harbours Authority (GPHA), representing the Ghana Government and Meridian Ports Services (MPS).

MPS is a partnership between Ghana Ports and Harbours Authority and The Meridian Port Holdings (MPH), which is in turn a joint venture between APM Terminals of the Netherlands and Bolloré Transport & Logistics of France.

The launch of marine engineering works, marks the material start of the execution of a deed, signed between GPHA and MPS in June 2015 to substantially expand Tema Port, as a key component of GPHA’s master plan for the development of port infrastructure in this country.

The successful completion of this initiative is set to fundamentally change Ghana’s position in West Africa’s maritime industry by effecting an increase in trade flow and improvement in transport links across West Africa.

The expanded port will have a 1.4 km quay with four deep berths, equipped with sophisticated container handling gantry cranes and Terminal Operating Systems.

Its capacity to accommodate cargo ships will consequently be four times greater than its current capacity. Tema Port will then be able to handle some of the world’s biggest container ships, carrying up to 18,000 containers.

In his inaugural speech, President John Mahama said, “Government’s decision has been to position the ports of Ghana as a trade and investment gateway to the West African sub-region. The overall economic impact of this project will translate into 400, 000 jobs along the logistics chain. The investment being made would change the dynamics of the country’s maritime industry over the next 100 years.”

The first phase of this project will involve the construction of a breakwater, dredging the entrance channel to accommodate larger ships, building a quay wall and reclaiming the terminal area behind the quay wall.

Mr. Richard Anamoo, Director General of the Tema Port, expressed his delight at this initiative and reiterated the authority’s commitment to contributing relevant and tangible resources to improve the economic status of Ghana.

“GPHA appreciates the harbour expansion project as an important step in achieving the dream of being a regional leader in the maritime industry. We recognize the collaboration of our partners and are grateful for their support,” he stated.

Mr. Mohamed Samara, Chief Executive Officer of Meridian Port Services (MPS) said, “We have selected top contractors and consultants for this project and will be placing a strong emphasis on local content. By the time it is finished, this sea port will be a world class port that could match the capacity of world renowned ports and compete most favourably with the largest ports on this continent.”

The Tema Port expansion is in response to increasing trade volumes of export goods and imports into the country as well as the growth in global economic activity.  If not for the expansion, Tema Port would have exceeded capacity within the next three years. The fourfold increase in capacity will ultimately translate into significantly reduced handling costs, thus making shipping in Ghana more cost effective and competitive.

“This project will save Ghana’s trade and industries an estimated US$400 million a year in sea freight and logistics charges.  Ghana will then become a much more cost-effective trade destination and make shippers in Ghana internationally recognized as being much more competitive, on a global scale,” Chairman of the MPS Board, Alhaji Banda said.

The project is also earmarked to bring the benefit of 5,000 more direct jobs, substantial capacity building, new equipment and the requisite technology transfer to the people of Ghana.

“Over the years, Ghana has become the centre of attraction for many investors even in the wake of the current global economic meltdown. We believe Ghana is a viable and promising place to do business and this is evident in the amount of the foreign direct investment that the country’s economy has been injected with over the period,” said Philippe Labonne, President of Bolloré Transport & Logistics.

Mr Peder Sondergaard, Vice President of APM Terminals added that, “Ghana has looked forward to maximizing its potential and making use of its abundant natural resources to boost economic growth and development. This is in line with the ideals of the APM Terminals”

The newly expanded Tema Port is projected to be fully operational in the 4th quarter of 2019, on completion of the construction works and is one of the largest public private collaborations in Ghana’s history.