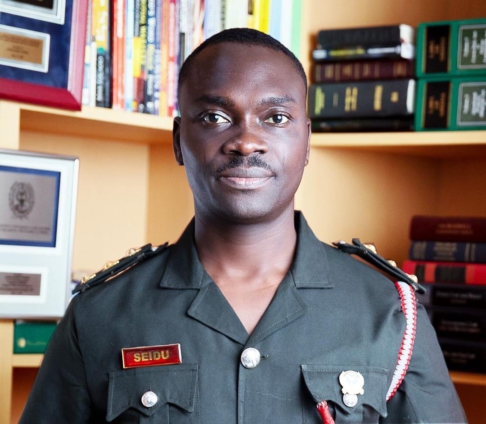 The Chiefs of the Wungu Traditional Area have urged Captain Jamaldeen Tonzua to raise Ghana’s flag high at Oxford University.

They say this will keep inspiring Ghanaian youth through his extraordinary academic pursuits, professional excellence and distinguished community service.

Captain Tonzua has received the coveted Blavatnik Scholarship at the University of Oxford, pursuing postgraduate studies in Public Policy.

The Chiefs bestowed their blessings on the Army Captain, who has consistently rendered service to his community when he called on them to explain that he would be out of the country for further academic pursuits towards enhanced community service.

Captain Tonzua, a lawyer with specializations in international law, environmental and energy law, recently graduated in the top 1% of his postgraduate law program at Georgetown Law, on the Dean’s List and with distinction.

He also received the prestigious Dorothy Mayer Award (for academic achievement and the potential for contribution to the legal profession and the individual’s community) and the Thomas Bradbury Award (for achieving the rank of distinction and the highest academic average in Master of Laws in Environmental and Energy Law).

The Paramount Chief of Wungu, Wunnaaba Sulemana Saaka, who spoke on behalf of the Chiefs of his traditional area, including the Yamarana and Mishuorana, stated in Mampruli that, “We urge Captain Tonzua to put up a great performance at Oxford and to keep inspiring the youth of the country and the youth of Mamprugu in particular”.

Captain Tonzua thanked the Chiefs for their blessings and reassured them of his commitment to community service.