Pro-Russian rebels in eastern Ukraine have handed over two flight-data recorders from the downed MH17 plane to Malaysian experts.

The handover came hours after the UN Security Council voted unanimously to demand immediate international access to the crash site.

The Malaysian Airlines passenger jet crashed last Thursday, killing all 298 people on board.

Western nations say there is growing evidence that flight MH17 was hit by a Russian-supplied missile fired by rebels, but Russia has suggested Ukrainian government forces are to blame.

EU foreign ministers, meeting in Brussels, are thought likely to discuss expanding the list of Russian officials targeted by sanctions, but have so far steered clear of targeting whole sectors of the Russian economy.

Both the EU and the US imposed sanctions on Moscow following its annexation of Crimea and the outbreak of hostilities in eastern Ukraine.

Experts say the "black boxes" will reveal the exact time of the incident and the altitude and precise position of the aircraft.

They should also contain the cockpit voice recorder, which it is hoped will provide clues as to what the cause of the crash was.

The head of the Malaysian delegation at the handover in Donetsk told reporters that the recorders were "in good condition".

He also said those talks led to the rebels agreeing to allow the bodies to be transported to Kharkiv and international investigators to access the area.

"In recent days, there were times I wanted to give greater voice to the anger and grief that the Malaysian people feel and that I feel," he said.

"But sometimes, we must work quietly in the service of a better outcome." 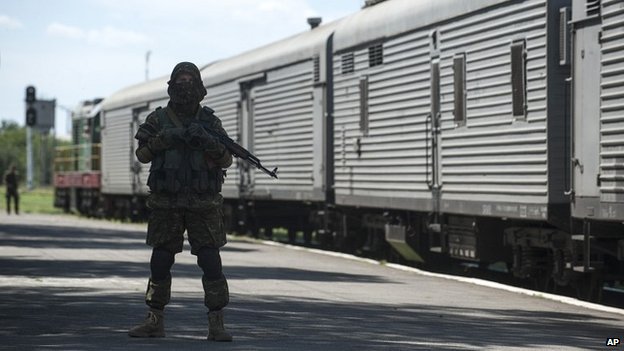 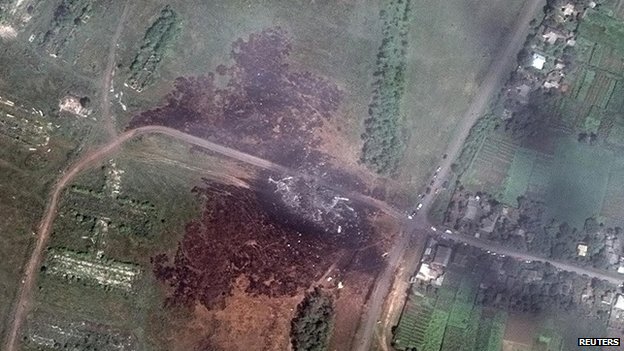 Pro-Russian rebels allowed a freight train carrying the bodies of 282 passengers to be moved from a town near the crash site to Donetsk on Monday.

The Malaysian experts and a Dutch delegation are travelling with the train to the city of Kharkiv, where it is expected to arrive later on Tuesday.

From there, the bodies will be prepared for transfer by air to the Netherlands where forensic experts will evaluate and identify them.

Meanwhile a UN resolution, proposed by Australia, was passed calling for a "full, thorough and independent international investigation" into the downing of the plane over Grabove on 17 July.

It also demanded that those responsible "be held to account and that all states co-operate fully with efforts to establish accountability".

After expressing misgivings about the wording of the UN resolution, the Russian ambassador ultimately raised his hand in favour. A veto from Moscow would have provoked even more of an international outcry.

US ambassador Samantha Power said it would not have been necessary had Russia used its leverage to get the separatist rebels to let international experts visit the site sooner.

Raising a hand in support of a resolution at the UN is different from lifting a finger to help, and the test of this resolution will come from its implementation on the ground.

Not for the first time during this crisis, the chamber of the Security Council felt more like a courtroom, with Vladimir Putin still very much in the dock.

There has been international outcry over the way rebels have handled the situation, leaving passengers' remains exposed to summer heat and allowing untrained volunteers to comb through the area.

All 15 council members, including Russia, voted in favour.

On Monday, three Dutch experts became the first international investigators to examine the bodies of the victims. They said the storage of the bodies had been "of good quality".

The train's departure came after international pressure on the separatists, who had been accused of limiting access to the crash site. 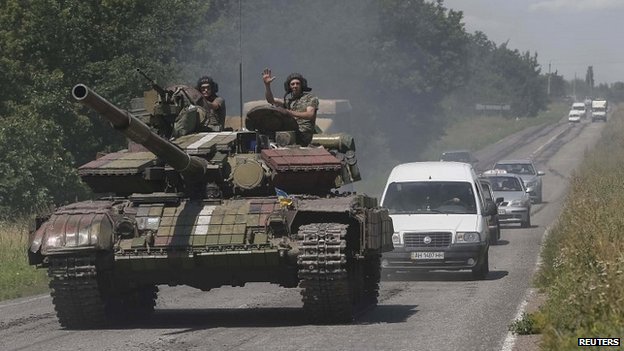 Fighting is continuing in eastern Ukraine, with heavy clashes reported near Donetsk on Monday

US President Barack Obama called on Russian President Vladimir Putin to stop the rebels from hampering the investigation at the crash site.

He also warned Mr Putin that he could face additional economic costs if he fails to take steps to resolve the crisis in Ukraine.

British Prime Minister David Cameron said there was strong evidence that pro-Russian separatists shot down the plane with an anti-aircraft system known as Buk.

Russia on Monday again denied allegations that it had supplied such missiles or "any other weapons" to the rebels.

The defence ministry said a Ukrainian military plane had flown within firing range of the airliner just before it came down, but Ukrainian President Petro Poroshenko has rejected the claim.

The fighting in eastern Ukraine erupted in April and is believed to have claimed more than 1,000 lives.

Battles continued on Monday, with heavy clashes around the main rebel-held city of Donetsk, with reports of at least three civilians being killed.