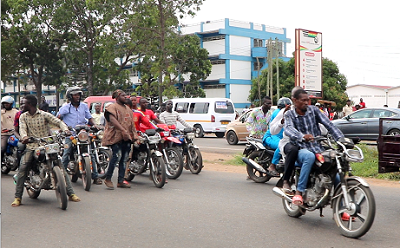 One person has been arrested following the assault of a traffic warden who tried to stop a funeral cortège from blocking the main road leading the Obetsebi Circle to the Awudome Cemetery on Friday morning.

Confirming the arrest of the unidentified man, the Kaneshie Divisional Commander, ACP Faakye Kumi said the suspect has been sent to the Kaneshie Police Station for questioning.

He said following the assault of the traffic warden, patrol teams were called to the scene and managed to disperse the crowd which included over 50 motorcycle riders.

Multiple eyewitnesses at the scene of the incident said the traffic warden was assaulted by several persons in the cortège at the Kaneshie Roundabout after he prevented a man on a motorbike from blocking the road leading to Accra.

Mr Sampah, a worker at the Awudome cemetery said the standoff was resolved after several warning shots were fired by the Police.

He said close to 50 armed police officers managed to calm the situation after engaging the leaders of the mourners in a discussion.

“What happened here was not a small issue, it was a big action that could have led to war,” he said.

Another eyewitness said he heard multiple gunshots around the State Transport Corporation yard before the crowd petered out.