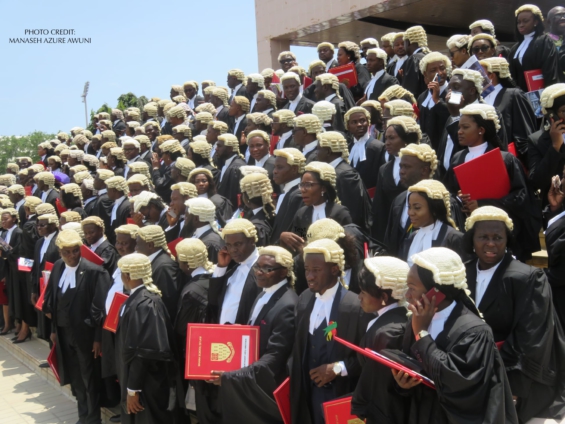 In December 2020, Ghanaian voters were presented with the option to choose between dying by firing squad or dying through hanging. A choice was made, and we are feeling the debilitating effects of the ever-tightening noose of bad governance and impunity.

Today, you lawyers in Ghana have an opportunity to choose leaders of your association, the Ghana Bar Association (GBA). I don’t know the contestants. And I cannot pass any judgment on their competence, character or courage.

What I know, however, is that the GBA is now like an over-aged breast, one that cannot produce milk for babies or entertain the eyes and mouths of grownups. In effect, the GBA has lost its essence and appeal.

There is no doubt that law is among the most respected, powerful and influential professions in this country. When I delivered a speech to students of the University of Ghana Law School a few years ago, I mentioned that lawyers were the most dominant professionals in all three arms of government in Ghana.

As I write this, the executive, the legislature and the judiciary are all headed by lawyers. The dominance goes beyond the heads.

In his welcome address to the 2021 batch of Harvard Law students, the Dean of the Harvard Law School, John F. Manning, said “being a lawyer is a superpower.”

The Ghana example attests to the fact that he is right. (This is despite the fact that some crooks who have found their way into your fold are known by the people who deal with them and should not bask in this unearned glory because they undermine the very nobility of the profession.)

Aside from being one of the most boastful and (sometimes arrogant) sets of professionals ever to crawl on Oboadeε’s earth, lawyers are like medical doctors. Every other professional needs them. So, the nobility and power accorded to the legal profession are reasonably grounded.

If lawyers are powerful and respected in our country, then its union, the GBA, ought to be one of the most respected associations in the country. Unfortunately, that isn’t the case.

As an observer, themoribund GBA isn’t different from the Ghana Journalists Association (GJA) to which I belonged until it lost its way.

I say the GBA is moribund because Martin Luther King Jr. taught us that “our lives begin to end the day we become silent about things that matter.”

Our wise elders have also taught us that a man does not run after rats when his roof is on fire.

So, when you hear the GBA louder on the policing of boobs of female lawyers than the deterioration of the rule of law, corruption and bad governance, then you don’t need anyone to tell you that this is an association that has outlived its usefulness.

When the President of the Republic and his team formed themselves into the instigator, investigator and adjudicator in suspending (in the form of a forced leave) and later hounding the Auditor-General out of office, one would have expected the GBA to lead the pack fighting for the reversal of that unfortunate decision.

When some individuals and civil society groups petitioned the Supreme Court to intervene, the apex court could have dealt with that important constitutional matter in two weeks if it had attached the same seriousness it gave to the 2020 election petition. But after seven months, the petitioners discontinued the case because the delay of the Supreme Court had rendered it moot. And the GBA was mute.

Shockingly, the President had the guts to use the 2019 Bar Conference in Takoradi to state that the killing of Ahmed Suale should not be taken to mean an attack on press freedom. Again, the GBA did not find anything wrong with the desecration of its platform. If it did, it did not find its voice.

The list is endless. But the trend is simple. The GBA has lost its voice against any democratic vice.

I have learned about the influential role played by the GBA in the days of military rule. I have learned that the GBA used to be a respected voice when the cost of speaking up in this country was more detrimental than the fear of not getting favourable judgment in court or the inability to court the friendship of the powerful and mighty in the land.

Today, we have some semblance of a democracy. We have a democracy that is strong and robust only when it is compared with the miserable mess in our sub-region and continent.

We operate a democracy whose legislature isn’t different from the executive and whose conservative judiciary, which is perceived to hardly stray from the wishes of the executive.

We run a democracy in which the poor and vulnerable cannot walk to a police station and be sure to get justice against the rich; where getting such justice in the court of law remains a remote dream to the average citizen.

Our democracy has deteriorated considerably in recent years in many aspects. The abuse of power by the executive, the legislature, and to some extent the judiciary, is becoming a norm.

Critical voices from associations such as the GBA should serve as the guardrails against the arbitrariness in a country where state institutions are either robbed or rob themselves of the power to act in the interest of the people.

But when Supreme Court Judges attacked a law professor over academic research, which they found unpleasant, and the Ghana Bar Association did not put the Supreme Court in its rightful place, then members of the association should have announced the date of burial of the GBA.

Some individual lawyers wield powerful voices that can cause change. But some have decided to kiss asses and sing praises in order to be invited to the sumptuous buffet of the political and judicial spoils. Other conscionable ones are also afraid to speak up because of the fear of victimization and retribution.

There is, however, strength in numbers. There is safety and anonymity in speaking with the collective voice of the GBA. That’s why the GBA must not be allowed to die.

Whoever gets onto the executive committee of the GBA today should not be left alone. Until lawyers sit up and demand the best from the association, nothing will change.

And if groups such as the GBA continue to “see no evil, hear no evil and speak no evil”, lawyers will one day be called to join the pallbearers of our dying democracy.

And when democracy dies, the rule of law dies. And what’s the essence of lawyers when there is no rule of law?

This is a view of someone with enormous respect and enormous disdain for the law profession and lawyers.

My views may mean something. They may also mean nothing.

NOTE: Bongo is about 20 minutes’ drive from Bolga, so visit when you have time. You might find a business idea in water production

DISCLAIMER: The Views, Comments, Opinions, Contributions and Statements made by Readers and Contributors on this platform do not necessarily represent the views or policy of Multimedia Group Limited.
Tags:
Ghana Bar Association
Manasseh Azure Awuni
University of Ghana