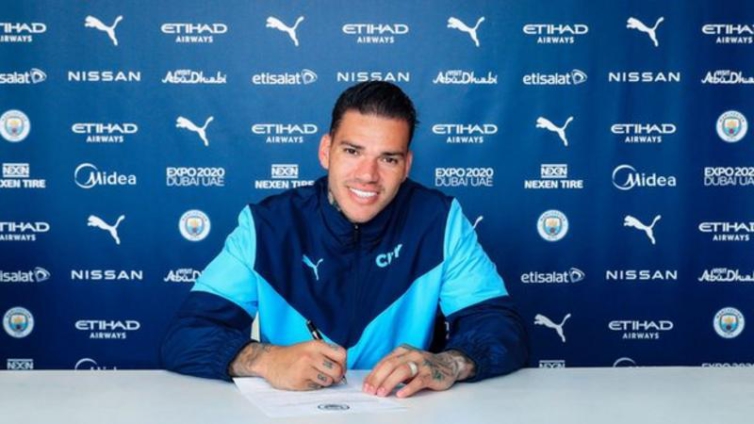 Ederson will remain at the Etihad until 2026

Manchester City goalkeeper Ederson has signed a new contract with the club, extending his stay at Etihad Stadium until 2026.

Ederson, who joined in 2017, has won three Premier League titles at City and has played 194 games for the club.

“This was an easy decision – there is nowhere else I’d want to be,” he said.

“To be part of one of the best squads in world football and to compete for trophies year in year out is what every footballer wants, and that is the opportunity you’re given at City.”

Since signing from Benfica four years ago, Ederson has won every possible domestic honour during his time at the Etihad, including one FA Cup and four EFL Cups to add to the three Premier League titles.

In his 194 appearances in a City shirt, the Brazilian has kept an outstanding 95 clean sheets and twice been awarded the Premier League’s Golden Glove.

“We have achieved so much in the last four years,” he continued.

“I am confident we can continue to bring more success to the club in the coming seasons.”

The 28-year-old also praised the “outstanding” Pep Guardiola and said that working with him has been “one of the greatest experiences of my career”.

Manchester City director of football Txiki Begiristain added: “Ederson is one of the best goalkeepers in the world.

“His performances over the last four years have been nothing short of exceptional and there is no doubt he will continue to be a key player for us. We are thrilled he has committed his future to the club.”