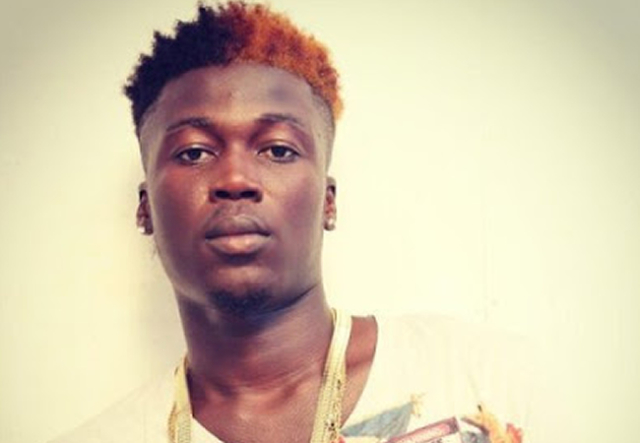 Budding rapper, Wisa, who was invited by the police Saturday for showing his genital during a performance on stage, has been granted bail.

The Police granted the musician, who is well known for his smash hit single ‘Ekiki Me’, bail late Saturday after a marathon interrogation at the Accra Regional Police Command.

The young musician, Myjoyonline.com gathers, was at the police station in the company of his manager Konadu Buahen and some members of his management team.

Sources tell Myjoyonline.com that Wisa left the Accra Regional Police Command after 6pm Saturday and has been asked to report back on Monday.

Wisa leaving the police station after the interrogation

The rapper did the unthinkable while performing at this year’s Decemba 2 Rememba organised by Accra-based Citi FM Thursday night. He decided to strip on stage and show his genitals.

Midway through his performance on stage, the musician while wriggling his waist behind a voluptuous lady drew down his white boxer shorts which was already showing in his saggy jeans and pulled out his manhood.

To the dismay of many, Wisa, who clearly did not see anything wrong with the act, continued humping behind the lady. The act by the musician has been condemned widely on social media.

It is unclear whether Citi FM lodged an official complaint with the police but the country’s Criminal Code prohibits indecent exposure.

Jessica Opare Saforo, Programmes Manager of Citi FM, in a tweet apologised for the unfortunate incident.

She said: “Pls accept our sincere apology about the unfortunate incident with Wisa Greid. Citi FM does not condone indecent exposure”.

Edward Nana Poku Osei (Hammer), Director of Hiplife and Hip-hop at the Musicians Union of Ghana (MUSIGA) in a statement expressed disappointment in the young musician.

According to Hammer, Wisa “disgraced this entire organization and the Ghanaian Music industry with his indecent exposure.”

The musician, reacting to the huge public uproar generated by the incident, said in statement that he has regretted his action and is ready to “avail myself to all planned disciplinary actions in the coming week.”