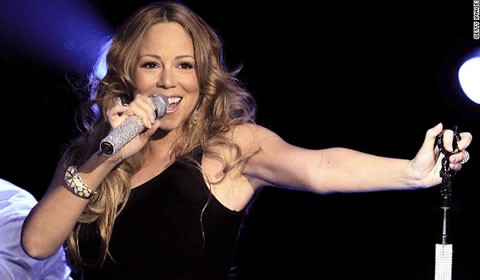 The diva kicked off her Elusive Chanteuse World Tour in Tokyo and met with difficulties, including her mic stand breaking mid-song.

It likely wasn't the musical divas idea of the best way to kick off her tour.

Carey sang "Always Be My Baby," but seemed to forget the lyrics at times and struggled to hit the high notes she's famous for, a video obtained by TMZ showed.

The 44-year-old singer also found it challenging to get through her hit "We Belong Together," not only because the mic stand broke, but also because her voice sounded as though it was giving out on her.

"Wait a minute, I can't go on," Carey can be heard saying in a video posted to YouTube on Saturday from the first night of her Elusive Chanteuse World Tour.

It's unclear whether her vocal troubles were due to illness or if Carey was distracted by something else.

This year has proven quite difficult for the songstress, with her album sales for "Me. I Am Mariah … The Elusive Chanteuse" seeing the smallest opening for a non-holiday studio effort. She released the album on May 27 and by the week ending June 1 it had only pushed 58,000 units, according to Billboard.

Outside of music, Carey's 6-year marriage to Nick Canon fell apart in August although he pledged his love for her on Twitter in early Sept.

"I will forever be indebted to her for blessing me with our children," Canon tweeted about Carey and their 3-year-old twins, son Moroccan and daughter Monroe.

"I will always love her unconditionally for this and so much more," he added.

Carey will continue her tour of Japan with her next stop on Monday in Yokohama.