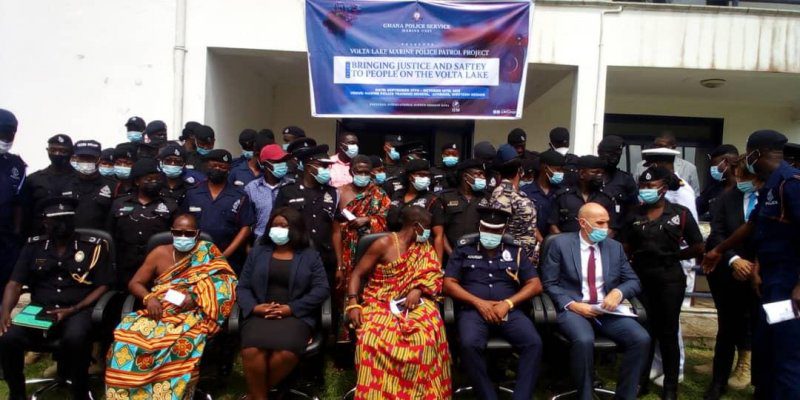 It is organized by the International Justice Mission (IJM) in conjunction with the Ghana Police Service (GPS) and the Ghana Maritime Authority (GMA) on the theme, “Bringing Justice and Safety to People on the Volta Lake”.

It would equip the Marine Police Officers with the requisite skills to safeguard child trafficking on the Volta Lake.

It would also touch on navigation and how to cruise at shallow waters.

Addressing them, the Deputy Western Regional Police Commander, DCOP Victor Adusah Poku said recent investigations and survey revealed that” there is less law enforcement or security presence on the waters of the Volta Lake”.

He said there were a lot of police stations around the lake, but lacked the capacity to access the waters to enforce maritime laws and to protect the citizens who reside on the various inaccessible banks and islands.

He added that human trafficking was rampant across the Volta Lake in which many young children were separated from their families and trafficked from Regions across Ghana into forced fishing labour on the Volta Lake.

He said many of the children could not swim and risked drowning as they were pressured to dive deep into the lake to untangle nets.

DCOP Adusah Poku lamented that the situation exposed the children to physical and emotional abuse, deprivation of education and malnourishment revealing that “an Indian hemp cultivation and transportation is suspected to be on-going on some areas of the banks of the Volta Lake”.

He said these developments called for an effective and efficient maritime law enforcement agency and for that matter the Ghana Marine Police to protect life and property, prevent, detect, arrest and prosecute perpetrators of these marine crimes in and around the banks of the Volta Lake in a bid to reduce the security and economic threats posed to the nation to the barest minimum.

According to him, the Ghana Marine Police in fulfilment of one of its key mandates of providing ports, waterways and coastal security, have agreed to partner and collaborate with the IJM to organize the training course to build capacity and sharpen skills of the police personnel within the Marine Police department to effectively and efficiently tackle all manner of crimes including; child labour/trafficking and also show constant presence on the Volta Lake.

DCOP charged all participants to exhibit a high level of professionalism and take the course seriously to achieve the intended purpose and their mandate.

Country Director for the International Justice Mission, Mr. Will Lathrop observed that for decades there has been crime of every kind on the Volta Lake as there was no police presence to control crime.

He pledged commitment to strengthen government institutions to deliver their mandate and that IJM would collaborate to train the police into a leap force to check crime.

The Director at the Ghana Marine Police Training School, Chief Superintendent Joseph Antwi Ababio observed that the training was critical to equip the police with the knowledge on human trafficking and child labour especially on the Volta Lake.

He charged the officers to exhibit discipline and high moral standards.

The Chief of Aiyinasi, Nana Ekye Kpanyinli thanked the Ghana Police Service for the programme and hoped it would be sustained to deal with human trafficking in many forms.

He appealed to the Marine Police officers to exhibit professionalism and allow the laws to work on perpetrators on the Volta Lake.