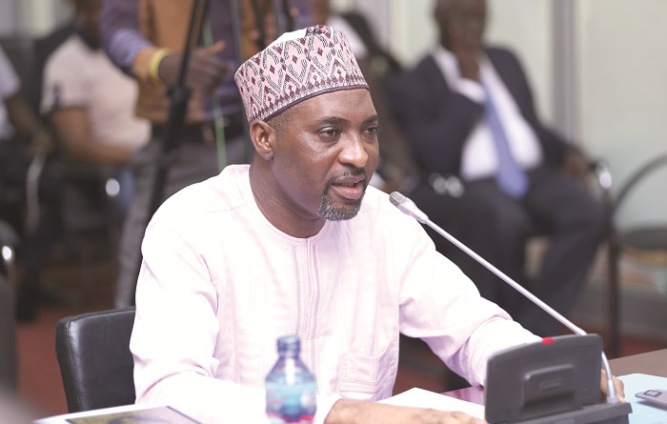 The Minority Chief Whip, Muntaka Mubarak, says there will be dire consequences for Members of the Minority Caucus who defy the three-line whip issued by the Party’s leadership in Parliament.

The three-line whip is an instruction given to Members of Parliament by their leader telling them they must vote in a particular way.

If the members fail to follow through with the wishes of the leader, there could be consequences.

The three-lined whip was issued in relation to the vote of censure expected to happen on Thursday, November 10 against the Minister of Finance, Ken Ofori-Atta.

Speaking in an interview on Joy FM’s Midday News on Thursday, the Minority Leader, Haruna Iddrisu said he has asked the Minority Chief Whip, Muntaka Mubarak, and Deputy Minority Whip, Ahmed Ibrahim, to carry through with the order.

In Parliamentary procedure it is a three-lined whip however the Minority Leader stressed that “I have issued a nine-line whip, not even three-line whip, three times three … and we will stand strong on this matter,” he said.

“I mean the consequences are very dire because before your Whip issues three-line whip, it has been discussed at all levels and agreed and then he or she as Whip is given the full mandate. And then you heard my leader on your own network he said he had not only authorized three, but he has even authorized nine.

“So I have the three and I have the full backing of our establishment. So if you are a member of my caucus and you defy me, what it means is that you’re virtually defying the whole establishment,” he said on JoyNews’ PM Express.

He added, “It can lead to [us] not allowing you to stand for us in the name of our party again in your constituency; we can sanction you within the caucus. We have a lot of other measures that we take including if you’re a Ranking deposing you from being a Ranking; if you’re a Chair, removing you as Chair; if you’re sitting at the front-row we can take you back; if we were having some package or some special support for constituencies we can withdraw that, there’s a lot that can go against a member that defies the Chief Whip.”

Meanwhile, the New Patriotic Party has directed all members of the Majority caucus to abstain from the scheduled vote of censure to remove the Finance Minister.

He noted that while there are genuine concerns to be addressed concerning the position of the Finance Minister and his role in Ghana’s economic management, it would be counter-productive if the Majority caucus joined the Minority side in ousting the Minister.

“The leadership of the NPP wishes to assure our Members of Parliament and the Ghanaian populace that there are ongoing internal engagements aimed at addressing legitimate concerns expressed by various stakeholders regarding the management of the economy, including the calls for the resignation or dismissal of the Minister of Finance.”

DISCLAIMER: The Views, Comments, Opinions, Contributions and Statements made by Readers and Contributors on this platform do not necessarily represent the views or policy of Multimedia Group Limited.
Tags:
Muntaka Mubarak
Vote of Censure