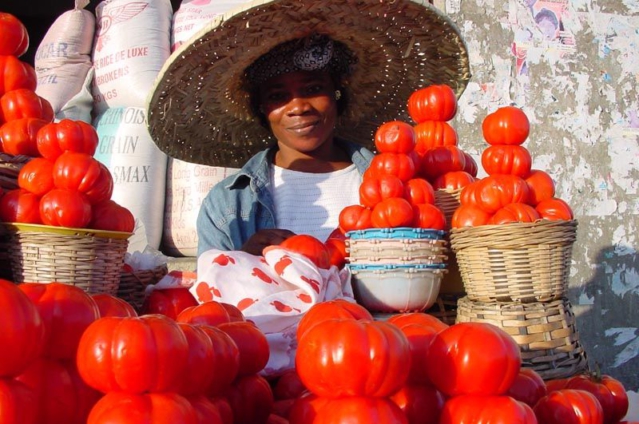 Kotokuraba Market has recently been rebuilt, but for the longest time, it was a labyrinth of table-top enterprises zoned by the metropolitan assembly to aid their market toll collections. So all vegetable sellers were zoned together, fishmongers in one area, butchers all in a row, fabric sellers in their own enclave, and so forth. In the Vegetable section, the same logic was applied. Pepper sellers were together, onion sellers in one place, and so forth.

The one product that had the most sellers was fresh tomatoes. About eight or nine different tables were adorned with the red fruits piled together in fours or fives, each pile being offered at a fixed price. These prices didn’t much differ from vendor to vendor, and as soon as the shoppers drew near, all the women would take samples of their wares and accost them in the aisles, hoping to entice the customers with the freshness and/or cheapness of their particular selections.

Now, on the many occasions throughout my childhood that I accompanied my mother to Kotokuraba, there was one tomato seller who I never saw joining the assault on customers. She always sat calmly behind her table with a big smile on her face. She never left her post, because 80% of the customers CAME TO HER! Most of the poor shoppers being accosted were fighting their way through her competitors to get to her.

Now, I have tried and failed to remember her name, so for the purpose of our story, let’s call her Auntie Mary.

Auntie Mary received all her customers with the biggest smile you’ve ever seen. She knew everyone by their name. Even better, she had nicknames for everyone. She called my mother Adom – the Fante word for my mother’s first name, Grace. She even knew my name, and called me Kojo-Kojo.

As soon as my mother and I made it to her table, Auntie Mary would greet us loudly with her big smile, and ask after my father and sisters as if she had spent the whole time since our last Kotokuraba visit thinking about them. She knew what meals my mother needed tomatoes for, and would simply reach under her table and bring up an already measured basketful of the big red fruit, empty them into a black polythene bag, and hand them to my mother, who would pay her without even checking the contents of the bag.

No haggling, no bargaining. They rather spent the time chatting about family, church, traffic, however many topics they could cram into their three-minute weekly encounter. Then she would pat me on the head and say, “Kojo-Kojo, oyaa, take wo education seriously, ai”, and send us on our way to make room for the next customer, who she would greet with the same big smile and personal greeting.

Now, it was never quite clear to me why everyone preferred Auntie Mary’s tomatoes to the other sellers’. They all looked the same to me, and I seriously doubted that her tomatoes reacted in any remarkably different way when introduced into light soup. But overwhelmingly, people thronged to her stand in numbers that nobody else could compete with. She owned the tomato market. All other sellers were simply fighting for her scraps.

Of course, as an adult, I now understand what her secret was: attitude. That was the single crucial differentiator between Auntie Mary and every other non-scoring seller in the market. Their product was the same, they were selling it in the same place for pretty much the same price. But Auntie Mary made you feel like you mattered to her. To her, it wasn’t about tomatoes. It was about you.

It wasn’t about your money, or her product, or your savings or her profit. It was about the things you really cared about. Your husband, your children, the price of lace and the yards you needed to buy for the number of funerals you had lined up for the month. It was about the increase in school fees and the decrease in chop money. It was about where on earth your daughter was going to find a husband. Her entire attitude was that whatever mattered to you mattered to her. And she went far above and beyond the basic effort required for selling tomatoes, to give her customers a personal experience that they would never get anywhere else.

So why am I telling you about Auntie Mary? Well, a conversation I had last week with a man whose advice I value greatly, reminded me of this simple truth: that in this world, we are all selling tomatoes. Whatever job you do, there’s someone else who does exactly the same thing – either right there at the next desk, or in the next branch, or in the next company. Even if you don’t have a job, you and all other unemployed graduates are selling the same tomatoes to prospective employers. And ultimately, it is the best of you that will progress farthest in your careers, and/or grow the biggest business.

So since we’re all doing the same job – since we’re all selling tomatoes – what will be the differentiator? What will make you go farther and rise higher than your competitors? It’s your attitude.

Are you the one who provides that service with a smile? Is your business the one that actually shows an interest in your customers? When people come to you, do they get a personal experience that they can never get anywhere else? Are you willing to go above and beyond the basic effort required to sell tomatoes, just so that when your competitors throw themselves at your customers, they will simply fight their way through the onslaught just to get to you? Well, I certainly hope so, because in the end, the one willing to do the most, will get the most.

My friend, it’s Monday. Time to look yourself in the mirror and ask that all-important question: how do I win this week? How do I wipe the floor with the competition? How do I show these people that there is nobody better at this than me? Well, the answer is simple. It’s not about the tomatoes. It’s about the experience. Who is your customer? Whose money, attention or resources are you competing for? Whoever they may be, your mission is to make it all about them. Make them believe that you spend your time thinking of nothing but them, and when the time comes for them to choose, they will think of nobody but you.