Message from the Morning Man: The Gymnast 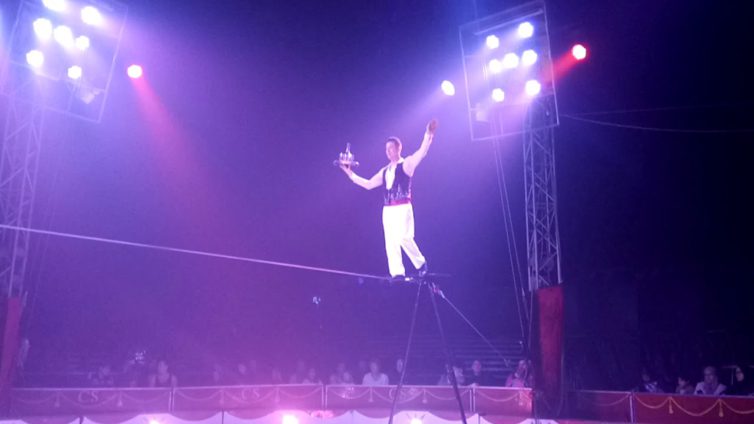 The story is told of a highly skilled gymnast in Canada who was an expert at tightrope walking. Many times he had walked a thin rope between the peaks of two very high mountains. Each performance attracted  huge crowds who marvelled at his poise, balance, skill and prowess.

One day, he decided to jazz up his act by adding a new element of danger. He would do the tightrope walk while pushing a wheelbarrow. The news went out and everyone looked forward with excitement and anticipation to his next event.

As the big day drew nearer, the gymnast started to get really nervous. Pushing a wheelbarrow would be dangerous. He wouldn’t be able to stretch out his hands to maintain balance as the rope bounced about. What if he couldn’t do it? What if he fell a hundred feet to his death?

The night before the big event, he went over to his best friend’s house, and confessed his fears. His friend reminded him of all the other times the gymnast had overcome great odds to achieve great things. His friend patted him on the back and said, “I believe in you, and i’m with you every step of the way.

The gymnast started to feel confident again. “Thank you”, he said to his friend. “So since you have so much faith in me, would you like to sit in the wheelbarrow when I do the crossover tomorrow?”

The friend held the gymnast by the shoulders, looked him in the eye and said, “Not a flaming chance in hell. Are you crazy?”

Friends, there is a simple message here: encouragement and praise is great. It can boost your ego, fuel your courage and increase your sense of self worth. Having people around who believe that you can make it, actually increases your physical capacity to make it, and reduces your fear, nerves and trepidation. But no matter how much faith people have IN you, encouragement cannot do the job FOR you.

After everyone has expressed their belief in your ability to move mountains (or in this case, push a wheelbarrow between them at a great height), you will still have to be the one who takes that first step. And every step after that. It’s still on YOU.

YOU still have to take all the encouragement, faith, prayers, and good wishes, and use it as a fuel to actually MOVE toward your goal.

So what is it that everyone says you’re so good at? How many people come up to you and tell you you ought to be on tv or radio? How often have people said you ought to read law? How many times have people told you you can do it? Well, it’s all true. SO WHEN ARE YOU GOING TO START DOING IT?

My friend, let’s seize our destinies whether or not someone is with us on this, because we came into this world alone, and will leave it alone, so, in the end it’s up to us whether we sink or swim. It’s up to us. The player scores the points, not the cheerleader.

My name is Kojo Yankson, and they can talk me up the mountain, but only I can walk the tightrope.

DISCLAIMER: The Views, Comments, Opinions, Contributions and Statements made by Readers and Contributors on this platform do not necessarily represent the views or policy of Multimedia Group Limited.
Tags:
Kojo Yankson
Message from the Morning Man
The Gymnast