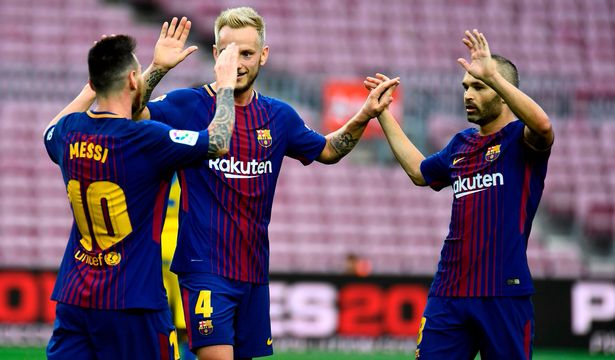 Barcelona beat Las Palmas 3-0 with Camp Nou closed to fans in light of the circumstances around Sunday's Catalan independence referendum.

Sergio Busquets and Lionel Messi were on target at Barcelona beat Las Palmas 3-0 behind closed doors at Camp Nou, preserving their 100 per cent record in LaLiga against a backdrop of unrest surrounding Catalonia's independence referendum.

Barcelona president Josep Maria Bartomeu explained the decision to play at an empty Camp Nou was borne out of solidarity and a "rejection of what has been experienced" as the stadium scoreboard bore the message "Democracia", featuring an illustration of a ballot box.

But a home side featuring five Catalans were seemingly unsettled by the circumstances and their surroundings during a listless first-half showing. Las Palmas enjoyed the greater share of possession and hit the post through Jonathan Calleri, with Barca's only advantage appearing in a 4-0 yellow card count at the break.

The half-time introduction of Ivan Rakitic and Andres Iniesta by Ernesto Valverde proved inspired as their midfield colleague Busquets – one of the Catalan contingent – crowned Barcelona's most convincing passage of play by breaking the deadlock in the 49th minute.

Messi then came to the fore in typical style with a brace inside the final 20 minutes to increase Barcelona's advantage over Real Madrid to 10 points before their rivals host Espanyol later on Sunday, although a late injury to Iniesta took some shine off the win.