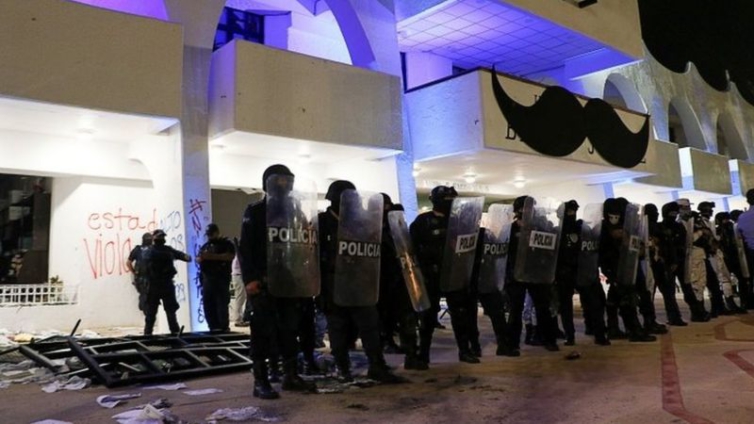 Police lined up outside the city hall

There has been outrage in Mexico after police in the beach resort of Cancún fired shots during a protest against the killing of women.

Two people were injured by bullets and two more protesters were also hurt in the chaos which ensued.

The demonstrators were protesting following the murders of two women in Cancún over the weekend.

The police opened fire when the protesters tried to gain access to the city hall.

Video shows some of the protesters ripping off plywood boards which had been installed to barricade the entrance to the building.

Shots can be heard and the protesters run for cover.

The governor of Quintana Roo state, Carlos Joaquín González, condemned what he called “violent acts” by the police and the “intimidation and repression” the protesters suffered. He said he had personally given clear orders that there should be “no aggression and no weapons”.

Speaking to Televisa news, the governor said that the local chief of police in Cancún had ignored his instructions and instead given the order to shoot into the air to disperse the protest.

The governor said that the bullets fired were not rubber bullets, as the police had initially said, but live ammunition.

He said that the chief of police should be suspended.

The mayor of Cancún, Mara Lezama, also condemned the actions of the police.

The protest was triggered by the killing of two women, whose bodies were found in the space of 24 hours over the weekend.

One of them was 20-year-old Bianca Alejandrina Lorenzana Alvarado, who had been reported missing on 7 November.