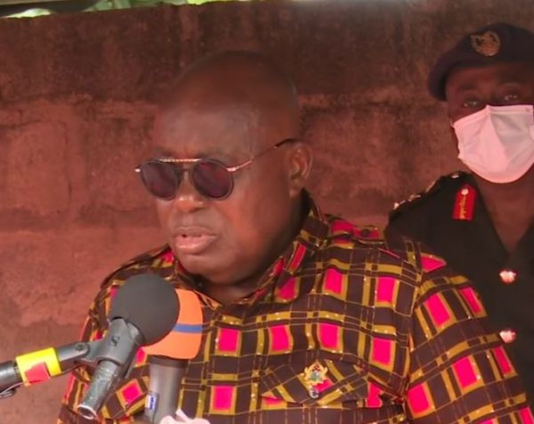 President Nana Addo Dankwa Akufo-Addo says with the murder of Mfantseman Ekow Quansah Hayford, the country has lost a gem.

The President, during his visit to console the family of the late Mfantseman MP, Ekow Quansah Hayford, said the demise of the MP is not just to blow to the family but the New Patriotic Party and the nation at large.

“You are not the only ones bereaved, but the whole of Mfantseman, Central Region and the nation at large, especially the party that this man served strongly, that is the ‘Elephant party’,” he said.

According to the President, he had plans of working closely with the deceased should he be re-elected, only for the unfortunate to occur.

He, however, added that the plans of God are not that of men.

He assured the family of his interest in ensuring that the IGP bring the culprit to book and face the law accordingly.

He further asked the family to accept his condolence.

“I know that is not what will console you because what you have lost cannot come back”.

President Akufo-Addo also assured the family of taking responsibility for the mother and the two children left behind to enable them to achieve their dreams once he [the President] is still alive.

He pleaded with the family to ensure that the burial date of the late Ekow Quansah Hayford favors him as he will want to be present.

He asked for God’s grace for the mother, adding that “your son was a very good person”.