Mfantseman shooting: We need to broaden the discourse of security on police resources – Security analyst 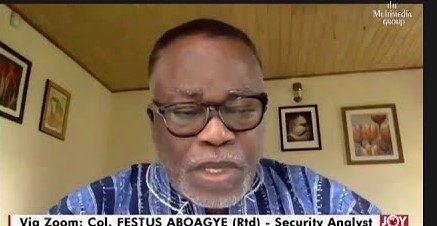 Security analyst Colonel Festus Aboagye (Rtd) has urged government to widen the scope on security discussions to cover the resources of the nation’s police service.

He made this statement in connection with the recent gruesome murders of Members of Parliament (MPs) and citizens in the country.

Speaking to Evans Mensah on JoyFM, Mr Festus Aboagye (Rtd) relayed that security for all Ghanaians should be the priority of the Police agency and not just for a privileged few.

His comment comes after a statement by His Excellency Nana Akufo-Addo urged the IGP to ensure that the perpetrators of the murder of the MP for Mfantseman, Mr Ekow Quansah are brought to book.

“Let us expand the discourse to ask the IGP to make a presentation to the Minister of Interior to identify what the shortcomings, gaps or deficiencies are.

“What are the additional resources the IGP needs so that the police service can adequately detect crime and prevent crime before it happens,” he added.

According to the security analyst, “there is a shortage of police officers without disaggregating them into specialisations. The ratio of police to civilian is not adequate per the standard of the UN.

Mr Festus Aboagye (Rtd) stated that it is not as simple as calling the IGP to do something he is not resourced to do.

“How many detectives do the police have? What level of training do they have to resolve complex cases like this one? How well are they resourced with funding to pay informants for information.”

He, however, suggested that a five-to-ten year police professionalization or a police expansion initiative be instituted.

“During five-to-ten years, let us now aim to have adequate number of police, well trained and well resourced. Then we can make a case for those who need special protection,” he added.