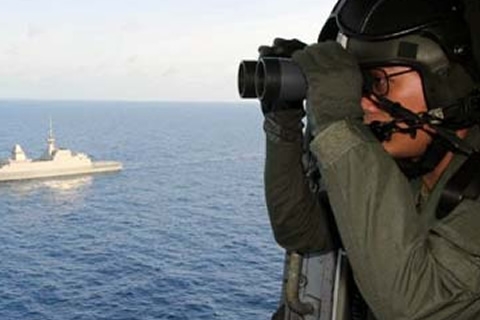 Australia has vowed the search for the missing Malaysia Airlines plane will go on indefinitely, despite no sightings yet of wreckage in the Indian Ocean.

Deputy PM Warren Truss said the operation would go on until "further searching would be futile – and that day is not in sight".

Satellites detected debris this week, but so far it has not been found.

Flight MH370 dropped out of contact an hour after leaving Kuala Lumpur for Beijing on 8 March carrying 239 people.

Malaysian officials suspect the plane was deliberately taken off course.

Britain's Daily Telegraph published what it said was a transcript of communications between the pilots and Malaysian air control, although it appeared to throw little light on the reasons for the disappearance.

The search in the Indian Ocean is being led by the Australian Maritime Safety Authority (Amsa).

It despatched six planes to the area on Saturday, to search an area roughly the size of Denmark. Additional vessels supplied by China, Japan and the United Kingdom are due to join them in the search.

The first plane has now returned, with no success in finding debris.

At the daily briefing in Kuala Lumpur, Malaysian Defence Minister Hishammuddin Hussein said that all means were being pursued to narrow the search corridor and that planes intended to search 10,500 sq nautical miles on Saturday.

But he said the conditions were "very challenging", with strong currents and rough seas, and a tropical cyclone warning that could affect ships involved in the search.

Mr Truss, who is the acting PM while Tony Abbott is in Papua New Guinea, said: "It is a very remote area, but we intend to continue the search.

"At this stage we are planning for it to continue indefinitely, although I recognise that there will be a time at some stage if nothing is discovered where a further re-appraisal will have to be made but we are not even thinking about that at the present time."

Mr Abbott said from Papua New Guinea: "I understand that conditions in the southern Indian Ocean are better today, so we've got six aircraft in the area. Later today, my understanding is that an Australian naval vessel (HMAS Success) will be in the area.

"There are aircraft and vessels from other nations that are joining this particular search, because tenuous though it inevitably is, this is nevertheless the first credible evidence of anything that has happened to flight MH370."

Royal Australian Air Force group captain Craig Heap said there was a ''reasonable'' chance of the search finding something.

Each aircraft is able to search for no more than two hours because of the distance from land.

Two merchant ships are currently involved in the search.

China – which had 153 of its citizens on board flight MH370 – is sending three navy vessels as well as its icebreaker Xue Long (Snow Dragon).

The search effort in the southern Indian Ocean is only part of a much wider hunt for the plane – reaching as far north as Kazakhstan.

On Saturday, Mr Hussein said that China, India, Pakistan, Myanmar and several other nations had informed Malaysia that analysis of their radar records had revealed no evidence of flight MH370 crossing their airspace.

Satellite data, picked up some seven hours after the plane lost radio contact, suggests it could have disappeared in two corridors to the north and south of its last known location in the Malacca Straits.

Mr Hussein acknowledged they were working against the clock, as they now have two weeks left to find the plane's "black box" voice and data recorders before they no longer transmit an electronic locator signal.

He said: "I am still quite concerned that – it's been two days – and yet the searches have not come out with any debris. I am not going to give up."

Experts say only two elements appeared of any note, although they stressed it was important not to read too much into them. One was that the final message at 01:07 about the plane's altitude – at 35,000ft – was an unnecessary repeat of a message six minutes earlier.

The other was that the loss of communication with the plane occurred at the handover point of Malaysian to Vietnamese air control.

At the press briefing, Mr Hussein said the transcript "does not indicate anything abnormal".

Malaysia also said the transcript published in the Telegraph was "not accurate".

Mr Hussein also said investigations of the plane's cargo manifest did "not show any link to anything that may have contribution to the plane's disappearance".

Malaysian officials say they believe the plane was intentionally diverted as it turned back on itself – heading towards the Malacca Straits – after its communications were cut.

Correspondents say many families are hoping the objects seen in the Indian Ocean are not debris from the plane, as they are holding on to hope that their relatives could be alive somewhere.

Wen Wancheng, whose 33-year-old son Wen Yongsheng was on the plane, said: "What wreckage? In a few days they are going to say it's not true.

"[The Malaysian authorities] need to stop giving us false information. I simply don't believe them anymore."

Mr Hussein admitted the Beijing briefing to relatives had been "tense" and an investigation was under way to try to improve the situation.