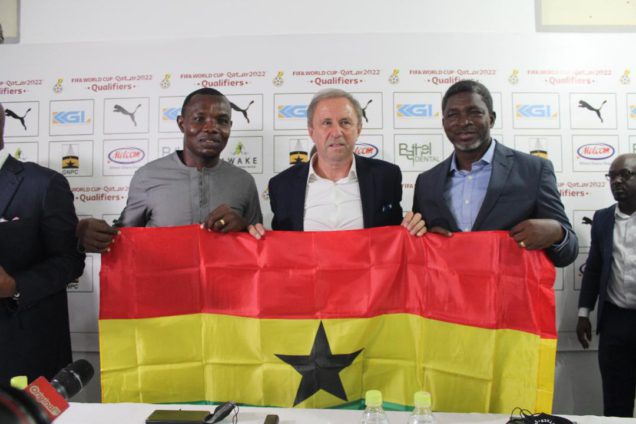 The President of the Ghana Football Association (GFA), Mr. Kurt Edwin Simeon Okraku is confident Coach Milovan Rajevac will deliver the 2022 Africa Cup of Nations (AFCON) trophy which has eluded the country since 1982.

The Serbian gaffer had been appointed as the Head Coach of the Black Stars for one year and is subject to renewal if he wins the 2022 AFCON in Cameroon and qualifies the nation to the Qatar World Cup next year.

During the unveiling on Friday, September 24 at the GFA Secretariat, the President of the Association, Mr. Okraku said Rajevac’s contract would be extended to February 2023 if he accomplishes the tasks given him.

The GFA President believed the coach had the experience and with support, he would clinch the AFCON title and take Ghana to the World Cup.

He said, “Milovan has the experience and we believe with the support from Ghanaians, he and the technical team would deliver. In his first stint with the Black Stars, he had control of the dressing room. He managed the likes of Sulley Muntari, Kevin Boateng, Michael Essien, Richard Kingston and we had no problem. He is the man for the job.”

The 67-year old led Ghana to the finals of the 2010 AFCON in Angola and advanced to the quarterfinal stage of the FIFA World Cup in South Africa 2010.

He would be assisted by Coach Maxwell Konadu and Otoo Addo.