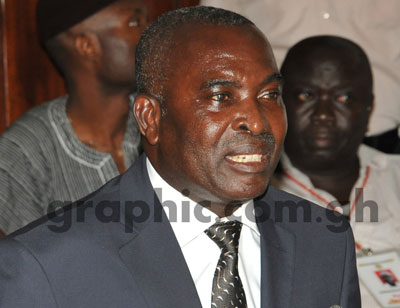 The Western Regional Minister, Paul Evans Aidoo has attributed the collapse of most state-owned enterprises (SOEs) to mismanagement and dishonesty by Ghanaians.

He said Ghanaian management staffs, entrusted with the management of state-owned companies such as the Black Star Line, the Western Veneer Lumber Company Limited and the West Africa Cocoa Milling Limited, mismanaged those organisations for their selfish gains.

They took that unpatriotic action without considering the future generation.

Mr Aidoo expressed these sentiments when he interacted with some senior citizens who had served the nation in various capacities at the Residency in Sekondi.

He said it was the wish of the First President of Ghana, Osagyefo Dr Kwame Nkrumah, that Ghanaians would manage their own companies and bequeath them to the next generation in order to stimulate economic prosperity and independence, however, such dream became a mirage because of mismanagement and dishonesty.

The Minister said Ghanaians no more thought about the repercussions of their negative attitudes and, therefore, continued to wreak havoc on the environment through illegal lumbering and small-scale mining resulting in environmental degradation and pollution of water bodies.

He noted that mass spraying chemicals and fertilizers meant for distribution to cocoa farmers for free were being diverted by unscrupulous individuals and sold on the open market while some smuggled them to the neighbouring countries.

The Minister noted that if such negative attitudes by Ghanaians were not checked, the younger generation would suffer severely and stall the country’s development.

He urged all well-meaning Ghanaians to be watchful and report such deviant individuals and nation-wreckers to the law enforcement agencies for the law to deal with them.

Awulae Annor Adyaye III, the Paramount Chief of Western Nzema Traditional Area, said there was the need for the youth to tap into the experience and knowledge of the senior citizens through regular interactions.

He, however, advised the youth to be respectful, humble and be prepared to learn from the senior citizens in order to engender the transformation of the nation.

Some senior citizens expressed concerns about the dwindling economic fortunes of the country, youth unemployment and immorality in the society.