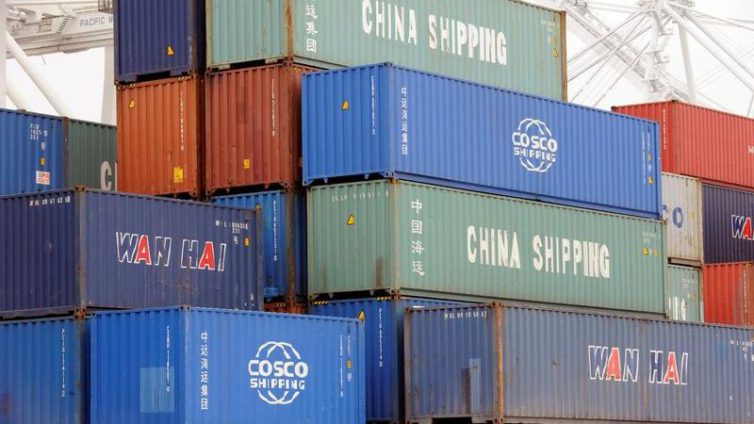 The situation at the UK’s largest commercial port is “improving” and Britons should shop normally for Christmas, a minister has told Sky News.

Oliver Dowden’s comments to Kay Burley come after a major global shipping company decided to divert vessels away from Felixstowe, blaming a backlog of containers at UK ports, to unload elsewhere in Europe.

The move by Maersk raised fears of delays to deliveries as the pre-Christmas trade rush gets under way.

But Mr Dowden, the Conservative Party chairman, said: “I’m confident that people will be able to get their toys for Christmas.”

He added the situation “is improving” and “I would say just buy as you do normally”.

Associated British Ports, which owns and operates 21 ports in the UK including Cardiff, Hull and Southampton, said all of its sites are “currently running without any delays or disruption to services”.

“ABP is aware of the challenges some UK ports are facing; however ABP’s significant investment in infrastructure, people, equipment and technology has meant that we are well placed to manage the present challenges,” it said in a statement.

David Huck, managing director for Peel Ports, which operates six sites in the UK, said: “The ongoing provision of critical goods and the smooth continuation of the supply chain is our number one priority and we continue to drive resiliency across all of our port locations to manage disruption.”

They added that at Liverpool, “significant investments in staffing, infrastructure and capacity has meant that we are able to continue providing an efficient and stable service to our customers”.

Meanwhile, Peter Wilson, managing director at Cory Brothers shipping agency, said the current shortage of HGV drivers has the “potential” to affect Christmas but stressed the supply chain “will not fail in the UK”.

He told BBC Radio 4’s Today programme that people should “be sensible, think ahead, plan appropriately, and order your Christmas goods and the items that you need in a timely fashion to ensure that you have them”.

Maersk said it was re-routing one 80,000-tonne container ship per week from Felixstowe, which handles more than a third of UK ship-based cargo, to unload elsewhere in Europe.

Smaller vessels were then to be used to get deliveries bound for the UK to Felixstowe or another port, a company spokesperson explained, because smaller berths currently had greater spare capacity for incoming goods.

They said that high demand for shipping space globally, coupled with the HGV driver shortage, had backed up containers at the largest berths at Felixstowe but added that the UK port was not alone in experiencing bottlenecks from time to time.

The British International Freight Association told Sky News that dwell times – the amount of time a container was waiting to be picked up at Felixstowe – had almost doubled to just shy of 10 days over the past fortnight.

Maersk also warned that growing delays could mean retailers would be forced to prioritise what they ship to deal with the congestion.

A spokesperson for the port, which handles more than a third of UK ship-based cargo, said: “The pre-Christmas peak, combined with haulage shortages, congested inland terminals, poor vessel schedule reliability and the pandemic, has resulted in a build-up of containers at the port.

“The vast majority of import containers are cleared for collection within minutes of arriving and there are over 1,000 unused haulier bookings most days.

“However, the situation is improving and there is more spare space for import containers this week than at any time since the beginning of July when supply chain impacts first started to bite.”

Mr Dowden said the government was “working through these challenges”.

“There is though clearly a challenging problem, particularly with HGV drivers, not just here, it’s across Europe,” he said.

“Poland, US, even China has this challenge, that’s why we’ve been taking steps to address it, whether it is, for example with training, 5,000 more places for training HGV drivers, making the pro

“We’re working through these challenges to address them.”

Mr Dowden added: “The government is very much seized of these challenges and is getting on with the job of addressing them… we need to get the skills here, have those higher-paid jobs.”

However, at this stage there have only been around 300 applications for visas from overseas HGV drivers, just over 20 of which have been approved.

Applications have not yet opened for training for new drivers.

The Department for Education told Sky News that applications will be “open from November and then will then begin from around the end of November or early December, depending on the timings of local training providers”.