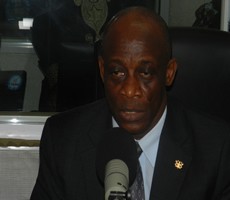 Minority in Parliament has rejected the Finance Minister's explanation that Ghana's economic difficulties is because of a ballooning wage bill.

Opposition MP for New Juabeng South, Dr. Assibey Yeboah, who is also a member of the Finance Committee of Parliament, says the wage bill excuse is "over-flogged". It cannot be a true explanation, he said.

The Minority in Parliament have been hammering government on what it says is "excessive borrowing" and a troubled economy that is defying management skills of the government.

At a press conference Wednesday, Minister of Finance and Economic Planning, Seth Terkper, confirmed economic challenges facing government. He says between January and August this year the country recorded over Ghc11 billion from revenue and grants but over 70% of the money went into payment of public sector workers leaving very little to finance capital projects.

He admitted that the economy is facing challenges as it cannot pay Ministries, Departments and Agencies because there’s not enough money.

The Minister also admits government is having a "moderate debt distress" and that donor partners are not releasing grants as it was expected.

Nonetheless, he assures that the economy is resilient because it is making some savings from the wage bill and that the 45.5% Debt to GDP ratio is within manageable limits.

But speaking to Joy News, the NPP MP recalls that in 2010 the Minister of Employment and Social Welfare E.T Mensah announced that government was prepared to migrate public workers onto the new public wage policy known as the Single Spine Salary Structure without any foreseeable difficulty.

Dr. Assibey Yeboah quoted the Minister "that the meal is ready and that all workers should come with their plates to be served."

This he says shows "clearly" the public wage bill cannot be an adequate explanation for challenges facing the economy.

The missing explanation is interests payments and  "excessive debts catching up" with government leading to an unsustainable economic situation, he said.

"We are insolvent, if we are not insolvent why are we not meeting the payments we have to make?, if it [debt] is sustainable then pay me my District Assembly Common Fund, pay contractors, pay GETFund, pay service providers", the MP charged.

He said despite government holding on to payments to statutory bodies, it is making payments to a non-statutory body like  Ghana Youth Employment and Entrepreneurial Development Agency (GYEEDA) – an agency riddled with allegations of corruption and financial malfeasance.

"Nobody wants to talk about GYEEDA, corruption and payment to cronies" the Finance Committee member said.