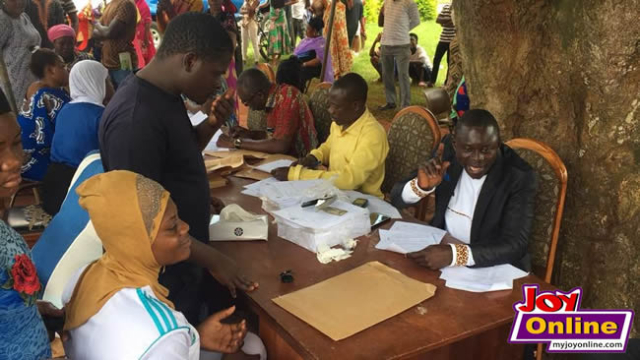 Suspected minors attempted to register whilst others succeeded in registering in the just ended limited voters' registration exercise.

That is according to the Coalition of Domestic Election Observers (CODEO).

In a statement detailing events of what transpired in the limited registration exercise, the election observer group named Juaboso in the Western Region, Krachi West in the Volta Region, Sawla-Tuna in the Northern Region as some of the areas where the minors registered.

The statement also said political parties, particularly the governing New Patriotic Party and the opposition National Democratic Congress took keen interest in the exercise with some of the party officials busing members to go and register.

The following is the full statement

The Coalition of Domestic Election Observers (CODEO) deployed its members to observe the limited registration exercise conducted by the Electoral Commission (EC) in preparation towards the creation of six (6) new regions proposed by the government. The exercise, which commenced on Sunday, September 16, 2018 and ends today, Tuesday, September 25, 2018, took place in all districts which would be located within the proposed regions. CODEO’s roaming observers visited some registration centers in some selected districts including, the Nkoranza North and South districts in the Brong-Ahafo Region, Krachi West in the Volta Region, Juaboso district in the Western Region and the Sawla-Tuna and Chereponi districts in the Northern Region. The following observations were made during the visitations to the registration centers:

· Although turnout of prospective registrants for the exercise was low at the start, the situation improved as the exercise progressed. Accordingly, some districts, such as Juaboso in the Western region were able to register as high as 215 persons on Sunday, September 23, 2018 alone;

· The EC’s system for online for registration of voters was intermittently slow in some of the districts observed. This affected prospective applicants who had to wait several minutes in queues. In the Krachi West District in the Volta region, for instance, scores of applicants waited in queues at different points in times as the network connectivity was slow. The situation was even more discouraging for persons who had travelled long distances from their communities to get registered;

· Political parties, mainly the New Patriotic Party (NPP) and the National Democratic Congress (NDC), took high interest in the exercise by deploying their agents, including local party executives to the registration centers visited by CODEO observers;

· CODEO noted instances of suspected minors attempting to register in the various districts with some of them ending up successfully registered. Some of the districts from where such developments were observed included Juaboso in the Western region, Krachi West in the Volta region and Sawla-Tuna in the Northern region. In the Juaboso district, many of these suspected minors went through the registration process while political party agents looked on, and sometimes defended the ages of such persons as being eligible. In the Sawla-Tuna district, some persons who were suspected to be non-Ghanaians had their registration applications challenged; and

In view of the above observations, CODEO makes the following recommendations:

1. The EC must take steps to improve its IT infrastructure supporting such exercises in the future;

2. Political parties and their agents must desist from prodding persons suspected to be unqualified from registering. Instead, they should resort to the formal challenge processes;

3. The EC makes the exercise more accessible by increasing the number of registration centers within districts;

4. The EC, together with the National Commission for Civic Education (NCCE), other non-state actors and the media, should intensify voter education, especially for minors, on the illegality and implications of attempting to participate in such exercises. In conclusion, CODEO observed that the exercise was generally calm. CODEO wishes to assure the public of its commitment to observe electoral activities and to help draw attention to relevant issues requiring action.