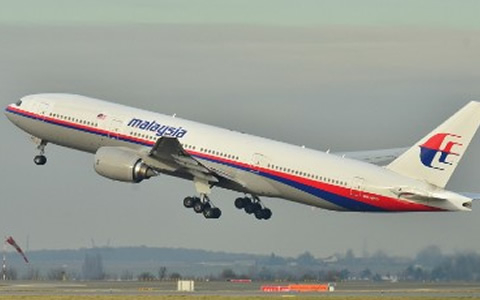 According to satellite and radar evidence, he said, the plane then changed course and could have continued flying for a further seven hours.

He said the "movements are consistent with the deliberate action of someone on the plane".

The plane disappeared a week ago with 239 people on board.

The Kuala Lumpur-Beijing flight last made contact with air traffic control as it headed east towards the South China Sea, about one hour after take-off.

Mr Razak told a news conference that new satellite evidence shows "with a high degree of certainty" that the one of the aircraft's communications systems – the Aircraft and Communications Addressing and Reporting System- was disabled just before it reached the east coast of Malaysia.

ACARS is a service that allows computers aboard the plane to "talk" to computers on the ground, relaying in-flight information about the health of its systems.

Shortly afterwards, near the border between Malaysian and Vietnamese air traffic control, the plane's transponder – which emits an identifying signal – was switched off, he said.

According to a military radar, the flight then turned and flew back over Malaysia before turning north-west.

A satellite was able to pick up a signal from the plane for some seven hours after it lost radar contact, although it was unable to give a precise location, Mr Razak said.

He went on to say that based on this new data, investigators "have determined the plane's last communication with a satellite was in one of two possible corridors":

– a southern corridor stretching from Indonesia to the southern Indian Ocean

This has gone from being a difficult search to being a really enormous, almost impossible, search for the plane, the BBC's Rupert Wingfield-Hayes.

Mr Razak said that in light of the new evidence, the investigation had "entered a new phase" and would focus on the crew and passengers on board.

Addressing reports that the plane had been hijacked, he said only "we are still investigating all possibilities as to what caused MH370 to deviate".

The families of those on board the flight have endured an agonising wait for news since the plane disappeared on 8 March.

An extensive search of the seas around Malaysia – involving 14 countries, 43 ships and 58 aircraft – have proved fruitless.

Mr Razak confirmed much of what had been leaked to the media, from US agencies and satellite companies, in the last 48 hours.

His government had been facing severe criticism for not being more open about what it knows, our correspondent says.