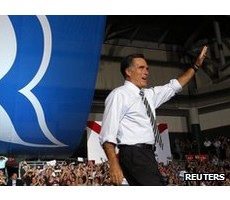 Republican presidential hopeful Mitt Romney is back on the campaign trail, muting political attacks in the aftermath of the super-storm, Sandy.

Mr Romney held two rallies in Florida, aiming to adopt a “positive tone”, according to his campaign.

Vice-President Joe Biden was also campaigning in the key swing state, as disaster relief kept President Barack Obama off the trail for a third day.

The race is neck and neck with election day looming on 6 November.

Mr Obama is scheduled to return to the campaign trail on Thursday with stops in Wisconsin, Nevada and Colorado.

Eight out of ten voters in a Washington Post/ABC poll gave Mr Obama an “excellent” or “good” rating for his handling of the emergency.

“This is quite a time for the country,” Mr Romney said at his first rally in Tampa, encouraging donations to the American Red Cross.

“We’re going through trauma in a major part of the country, the kind of trauma you’ve experienced here in Florida more than once.”

Mr Romney made a glancing criticism of the president during the appearance: “I don’t just talk about change. I actually have a plan to execute change and make it happen.”

He appeared later in the day in the Miami suburb of Coral Gables with Florida Senator Marco Rubio, Florida Representative Connie Mack and a former governor of the state, Jeb Bush.

Mr Bush was more direct in his criticism of Mr Obama, saying “his entire strategy is to blame others – starting with my brother, of course.” The former Florida governor is the brother of former US President George W Bush.

While the tone of the campaign has softened in Sandy’s wake, both camps have been openly tussling over a set of Romney ads that aired in the crucial state of Ohio.

The ads, which aired on radio and television, criticised Mr Obama for bailing-out American auto companies General Motors and Chrysler, and said those companies were planning to move production to China, leading viewers and listeners to the conclude that US jobs were threatened.

In Ohio on Tuesday, Vice-President Biden and former President Bill Clinton attacked the ads with Mr Clinton saying it was the “biggest load of bull”.

Mr Biden repeated the attacks during an event in Florida on Wednesday.

Both GM and Chrysler have made statements saying that US jobs were not at risk from increased Chinese production, and that the Romney ads’ claims were false.

“Let’s set the record straight: Jeep has no intention of shifting production of its Jeep models out of North America to China,” Chrysler spokesman Gualberto Ranieri said in a statement.

Mr Romney was “bereft of any fundamental understanding of the global automotive industry”, he added.

The campaign responded to questions from the Associated Press on the ad with an emailed statement from vice-presidential running mate Paul Ryan.

Mr Ryan wrote: “American taxpayers are on track to lose $25bn (£15bn) as a result of President Obama’s handling of the auto bailout, and GM and Chrysler are expanding their production overseas. President Obama has chosen not to run on the facts of his record, but he can’t run from them.”

The two auto companies still owe about the stated amount from the bailout, but have repaid billions more than that.

Mr Ryan was campaigning in his home state of Wisconsin on Wednesday.

Meanwhile, Mr Clinton was despatched to Minnesota on Wednesday and new ads were bought in three other states: Pennsylvania, Michigan and New Mexico, thought to be likely Obama wins. Campaign officials insisted the states were safe for the president.

In the aftermath of Sandy, Mr Romney faced questions from reporters about a proposal he made earlier this year to funnel money from the Federal Emergency Management Agency (Fema) to the states and private sector.

Mr Romney refused to answer questions from reporters on Tuesday about whether he intended to target the agency, which is now leading the relief effort in areas battered by Sandy.

On Wednesday, campaign aide Kevin Madden told reporters that “Governor Romney believes in a very efficient and effective disaster relief response, and he believes one of the ways to do that is put a premium on states and their efforts to respond to these disasters,” adding that “Fema has has a really important role”.