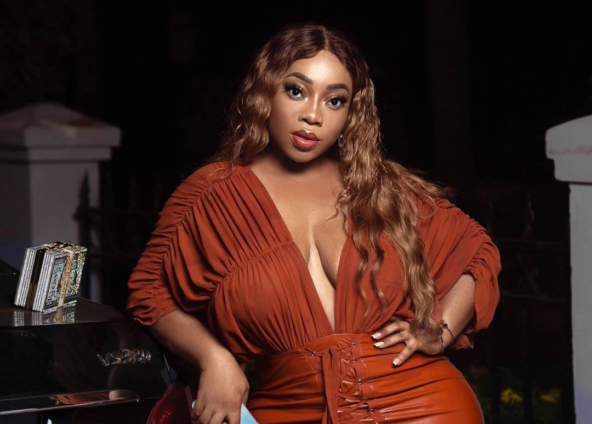 The Revelation Church, which helped actress Moesha Boduong, now Maurecia, renounce her old ways, has refuted claims the born again Christian has given away all her property and money to them.

In a press release, the church stated that the allegations are a “blatant lie from the pit of hell”, adding that all the church has done since she joined them was to show her the love of Jesus Christ consistently.

“We would like to categorically state that at no time has Maurecia or any member of her family given any properties, cars or sale proceeds to either the Lead Pastor or the church. This is verifiable,” parts of the statement read.

The church added that they have also not given anything to the actress to eat or drink as purported by some individuals.

A few weeks ago, Miss Boduong announced her repentance in a video as she shared her testimony at the Revelation Church. The social media influencer deleted all the skimpy photos of herself on her Instagram page to walk the talk.

She went ahead to make some startling revelations about her life over the years after becoming well-known in the country.

In a viral video sighted by Myjoyonline.com, the 31-year-old actress said she attempted suicide by jumping off an uncompleted storey building but was stopped by some workers nearby.

The actress revealed that she has emptied her account and sold her luxurious Range Rover car. According to her, the money which she used to live her extravagant lifestyle is “dirty”; thus, she doesn’t want to associate herself with it anymore.

Speaking to some people around her, she said, “I don’t have anything. I have given back everything. See the way I am looking now; I am happier than those days that you’d see me driving Range Rover and travelling around.”

After the video went viral, socialite Aisha Modi claimed Maurecia Bodoung gave the church and the lead pastor her money in another viral video.

The socialite claimed she was ready to fight the pastor spiritually if they failed to return Moesha to her “normal” state.

However, according to the church, after Maurecia’s video went viral, they mobilized resources and escorted her from the scene and home.

With the family’s consent on July 13, the church took the actress to a private place to help expedite her recovery process “with all related costs being borne by the church,” parts of the statement read.

The Church revealed that on Wednesday, July 14, her family members decided to take her back home; hence, Maurecia is currently in her family’s care.

They stated that they are focused on ensuring that the actress now makes a full recovery through fervent prayer, care and support in every way possible.

“Such careless statements are tantamount to defamation and will be treated with the is to seriousness they deserve, including legal action if it becomes necessary.

“Ordinarily, the church would not have responded as our focus is on her recovery and wholeness. However, this response has become necessary to set the record straight.”