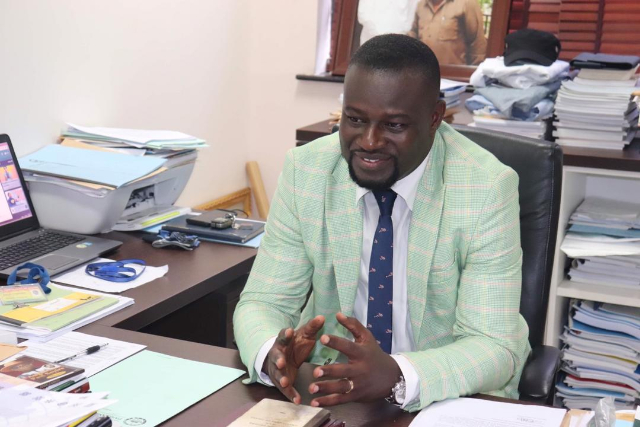 Member of Parliament for Nsawam-Adoagyiri Frank Annor-Dompreh is calling for increased investment in renewable energy.

He says renewable energy is the surest means to reduce Ghana’s energy generation bill and ensure electricity is made available to all.

The chairman of parliament’s Foreign Affairs Committee in a statement on the floor said there are numerous health and environmental benefits associated with Ghana increasing its dependence on renewable energy like solar and wind.

Below is the full statement read by the MP on the floor on the future of renewable energy in Ghana.

1. Mr Speaker, Ghana, like several African countries have made commendable actions in the direction of Renewable Energy. With sustainable energy developments envisaged through policies and conventions like the United Nations’ Sustainable Energy for All (SE4All) initiative, the Sustainable Development Goals (SDGs), and the United Nations Framework Convention on Climate Change (UNFCCC) there is no doubt that Ghana can transition to a laudable status for clean energy generation in the near future.

2. Worthy of mention is the fact that Ghana’s hydro energy, which is in itself renewable— as defined in Section 2 of the Renewable Energy Act 2011, Act (832) —generated a significant 51.5% of total electricity supplied according to the Energy Commission’s WEM bulletin for January 2019.

Though this percentage was attributed to shortfalls in the fuel supply to thermal plants, it gives an indication that we cannot continue to rely of the increasing cost of fuel to supply thermal plants and it also shows that renewable energy is capable of complementing existing sources of energy, to meet the demands of the people when explored to its fullest extent.

3. Mr Speaker, the wide range of renewable energy sources available in the Sub Saharan region provide an assurance of the sustainability of renewable energy. In perspective, according to the 2017 World Bank Solar resource data, Ghana falls within a Photovoltaic (PV) power region with areas especially in the north, labelled with yearly sum totals of 1,607 kiloWatts per hour. Kenya which is notable for solar power generation has PV areas recording yearly sum totals of 1,826 kiloWatts per hour. If they are utilizing this optimally, I believe we can do same.

4. The Ministry of Energy projects the 10% renewable energy penetration plan detailing solar to add 20 MegaWatts (MW) power and wind 240 MW by 2020 among other renewable sources being considered. Setting the tone for pursuit in renewable energy is a start to the outcome we wish to see in the future.

The AIMS energy journal revealed in a study that the potential of solar in Ghana, however, is estimated to be an untapped 50-100 MW usable renewable energy. Specifically, the abundance of solar resources in Salaga, Bawku, Bole, Bolgatanga, Navrongo, Tamale, Wa and Yendi, show that Ghana is endowed with solar energy potentials which are conducive for the installation and utilization of solar energy technologies and systems.

5. Mr. Speaker, according to World Resources Institute Climate Analysis Indicator Tool (WRI CAIT), CO2 emissions increased by 10.2 Metric tons from 1990 to 2011, with transportation contributing the largest share (40%) of the increase. On the front of mitigation, efforts are being made to significantly reduce Ghana’s carbon footprints.

To this effect, the Environmental Protection Agency in May 2019 announced that vehicles emitting dangerous fumes would be clamped down as a measure to ensure the enforcement of Road Traffic Regulation 111. This is one of many activities in the pursuit of a sustainable environment and mitigating climate change.

6. Augmenting Ghana’s agenda specific to Renewable Energy, the Energy Commission earlier this year presented the Renewable Energy Masterplan (REMP) to the Ministry of Energy. The REMP is designed to help the country achieve the following targets which include; (a) increased penetration of renewable energy from the 2015 baseline of only 42.5 MW to 1,363.63 MW in the national energy mix; (b) reduce the dependence on biomass as the main fuel for thermal energy applications; (c) provide decentralized electrification options from renewable sources in 1,000 off-grid communities; and finally (d) promoting local content and local participation in the renewable energy industry by 2030. By these projections, we can expect much from renewable energy in the years to come and it would be in the best interest of the country that we the front-liners of policy in Ghana, prepare ourselves to ensure its success.

7. In February 2018, the acting Chief Executive Officer of Korle-Bu Teaching hospital indicated that the facility spent GHC 1.2 million monthly on operational power and stressed that it was not sustainable. Major areas like schools, police stations, to mention a few, can be encouraged and supported to transition to renewable energy use through government intervention that reduces the cost of alternative energy technologies and produces favourable policy regimes to grow the renewable energy market. Hostels of schools, manufacturing industries, and state facilities should consciously invest in renewables to ensure their sustainability.

8. Revealed in a Deutsche Welle (DW) globalization report on energy, many rural households in Kenya were forced to seek power off-grid as a result of a high-costing and unreliable national grid. Kenya’s renewable energy provides 700 MW to their energy generation mix, with majority going to households. This has allowed its government to focus on other alternative energies like hydropower. Ghana, however, enjoys significant power supply from hydro plants generating about 900MW reliable capacity but cannot boast of geothermal energy, wind or solar power — which have the potential to provide several hundreds of Megawatts of green energy to Ghana.

9. Mr Speaker, a key attribute of such success in renewable energy exhibited in Kenya is undoubtedly private sector participation. Investing in this direction will enable the majority who are household consumers to produce electricity for domestic use, in effect decreasing the pressure on national-grid supply for sustainable industrial growth. There is a need to support and encourage Independent Power Producers (IPPs) and create a profitable and conducive environment for adopting renewable energy.

10. Several national grid-connected public institutions are burdened with colossal amounts of debt to their energy supplier year in year out. Of the few that are disclosed, even much fewer generate enough revenue to offset those debts without collapsing their operations. This breeds an attitude of constant reliance on government intervention against budgetary allocations, hampering development in many other sectors of the growing economy.

11. Mr Speaker, in conclusion, renewable energy is the surest means of reducing our energy generation bill which rises needlessly in this modern era of technology. Health benefits associated with reduced CO2 emissions for humans and also maintaining biodiversity cannot be lost on us as a nation. It is time to practicalize our renewable energy plans and set the tone for sustainable energy generation whiles contributing to the global agenda for climate change to sustain the earth.

Thank you for the opportunity given.
MP Nsawam-Adoagyiri
Frank Annor-Dompreh