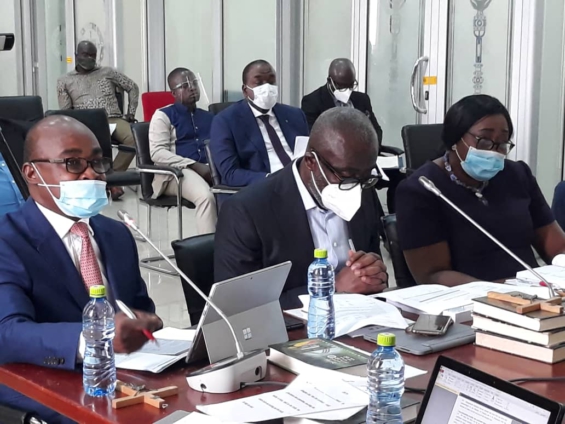 Members of the Public Accounts Committee (PAC) of Parliament have engaged in a heated exchange at their public hearing over the Ghana National Petroleum Corporation’s (GNPC) allocation to the First Lady’s Rebecca Foundation, Economic and Organized Crime Office (EOCO) and others as part of their Corporate Social Responsibility (CSR).

Apart from the above, some traditional leaders also benefited from GNPC’s gesture. An amount of ¢1.8 million was also paid for the celebration of Okyenhene’s 20th Anniversary, GH¢50,000 to the Ghana Journalists Association (GJA), $30,000 to the Ghana Boxing Association, including GH¢400,000 towards the preparations of the Damba Festival totalling GH¢5.4 million cedis.

A memo dated October 29, 2019, was written by the Board Secretary; Matilda Ohene and addressed to the GNPC Chief Executive, Dr K. K Sarpong following the approval by the board.

Considering the 2017 report of the Auditor General, a member of PAC, also MP for Ningo-Prampram, Sam George questioned why the Board of GNPC directly approved such huge sums of money to an anti-corruption body; like EOCO and other entities without routing it through the GNPC Foundation.

“Hon. Chair, I cannot speak for the board of GNPC but as I mentioned earlier the foundation has some thematic areas in which they carry out their activities, those are the umbrella under which the activities of the foundation is situated,” Joseph Dadzie told the PAC members.

“So I guess if there are any other requests that fall outside that of the foundation and comes directly to GNPC, I don’t know the consideration or the basis of the consideration and like I said I am not a member of the board so I cannot speak to the specific issues” he stressed.

The GNPC’s Board Secretary, Matilda Ohene who signed the memo was present at the committee hearing but she struggled to justify the action by the board resulting in a follow up from the Chairman for the Committee, James Klutse Avedzi.

“Hon. Chairman, I only act on the instructions of the board and the memo was to formally inform the Chief Executive of the decision of the board but I can get the board to formally respond to this question,” Matilda Ohene stated.

The development, however, has been greeted with disdain from the deputy ranking member of the Committee, Mohammed Hardi Tufeiru who questioned why the Chairman of Board allowed his colleague MP for Ningo-Prampram to ask such a question and objected to any further interrogations by the chairman on the subject matter.

“Chairman, they’re here to answer specific questions. They are appearing before the committee to respond to Auditor General’s queries, and they are not prepared for this matter you’re subjecting them through now,” the Nantong NPP MP said angrily.

“Chairman lets be consistent with the application of the rules” Mohammed Hardi Tufeiru replied the chairman of PAC.

“Deputy Chief Executive, I want this clarification to be made clearly, the question we are asking is not about anybody’s interest, it is about the interest of the people of Ghana, if a member here thinks that we don’t have the right to ask this question I will end the discussion here but the people of Ghana will judge” James Avedzi emphasized.

“As an accountant and auditor I need to know why certain things are done, if it is wrong we advised don’t do it again, if it is right we encouraged it to continue and somebody here thinks we’re doing it for politics, no” James Avedzi who is also MP for Ketu North stated.

DISCLAIMER: The Views, Comments, Opinions, Contributions and Statements made by Readers and Contributors on this platform do not necessarily represent the views or policy of Multimedia Group Limited.
Tags:
EOCO
Public Accounts Committee
The Rebecca Foundation