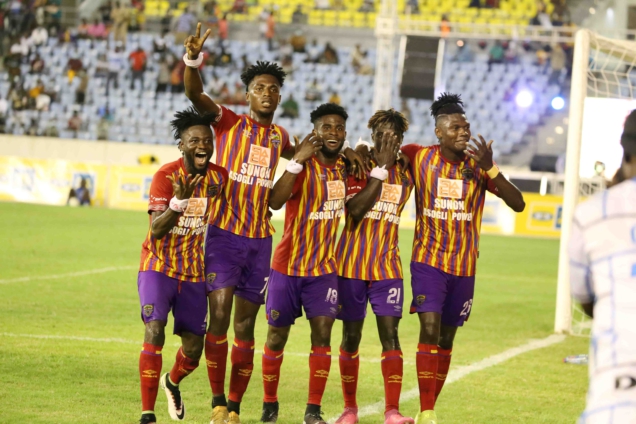 Accra Hearts of Oak will look to win the MTN FA Cup for a record 11th time when they face AshantiGold SC in the final on Sunday at the Accra Sports stadium.

Despite winning 10 titles, the Phobians haven’t won this domestic trophy since 2000 when they beat Okwawu United.

Hearts came close in the last competition in 2017 but lost the final to arch rivals Kumasi Asante Kotoko.

The Accra-based club have played in 19 MTN Cup finals and will aim to win their first double in 21 years.

Victory for Hearts will mean they have completed the league and cup double six different times in their illustrious history.

Hearts have been almost perfect in the competition so far scoring 12 goals and conceding just one goal. They beat Liberty Professionals 3-0 in the round of 64.

The 10-time champions then brushed aside Windy Professionals beating them 4-1 in the round of 32 stage.

Samuel Boadu’s men narrowly went past Accra Young Wise and Elmina Sharks in the round of 16 and quarter-finals respectively.

Before comfortably beating Medeama in the semi-finals at the Cape Coast stadium.

For Boadu and his team, the aim this season has been the league and FA Cup double. After securing the league title earlier last month, the Phobians are just 90 minutes away from securing a historic double.

Boadu will count on Daniel Barnieh who is this season’s MTN FA Cup top scorer with five goals.

Standing in Hearts’ way of making history is AshantiGold.

110 teams became 2 as Hearts of Oak and AshantiGold will battle it out in the final of the 2020/21 MTN FA Cup on Sunday.

The Miners won their only MTN FA Cup in 1993 and last reached the final in 2012 losing to New Edubiase.

Coincidentally, the Miners played that final at the Accra Sports stadium and lost 1-0.

They have a chance to make amends 9 years later in the same stadium.

Their journey to the final has been nothing short of sensational. AshantiGold SC began their campaign with 1-0 away win against King Faisal.

The Miners defeated third tier team Aboi Young Stars in Sameraboi at the round of 32 stage. The one-time champions then breezed through the semi-finals after beating Aduana Stars and Kintampo Top Talent 4-2 in the round of 16 and quarter-final.

The Obuasi-based club then comfortably breezed past Berekum Chelsea in the semi-final.

An amount of GH¢100,000 will also be presented to the winning team ahead of their participation in Africa.

Despite reaching the final, AshantiGold will not be playing in the CAF Confederation Cup next season.

This is because the Miners failed to acquire a licence to play in CAF Interclub competitions for the 2021/22 season.

The final will be played at the Accra Sports stadium for the first time in 7 years following the decision of the Ghana Football Association to rotate the venues for the final matches.

The last time a final was played at the Accra Sports stadium, Kotoko beat Inter Allies.