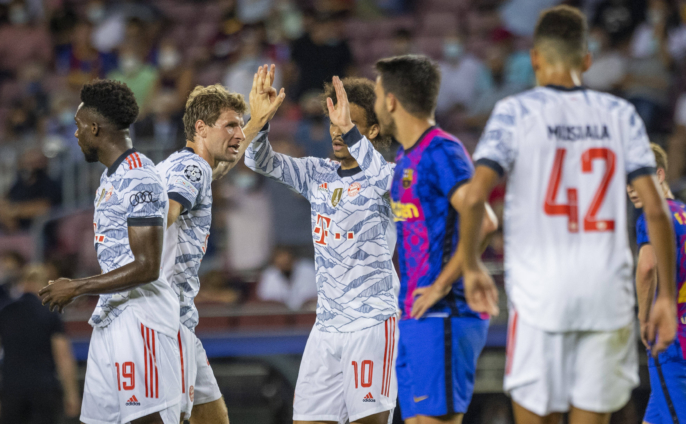 Goals from Thomas Muller and Robert Lewandowski settled a battle of the big two in Champions League Group E as Bayern Munich claimed a dominant opening-game victory at Barcelona.

The German champions controlled the game, with Muller scoring his seventh career goal against Barca courtesy of a first-half effort that found the net off Eric Garcia’s back.

Lewandowski made sure of the win with a typical predatory finish, poking his 74th Champions League goal into an empty net after Jamal Musiala’s drive had cannoned back off the post.

His 75th came late in the game, as he once again showed his talent in front of goal with a lashed finish after Serge Gnabry’s shot had come back off the post and fell to him in the box.

Barca, playing their first Champions League since the departure of talisman Lionel Messi, were flat and offered little, failing to muster a single shot on target.

The Catalan side have now lost three consecutive home games in European competition for the first time in their entire history.

They ended the game with four teenagers on the pitch, which did at least inject some urgency and lift a subdued crowd of just short of 40,000 because of Covid-19 restrictions.

But they were still thoroughly outclassed and by a Bayern team that were not even at their best.

The German side lead the group, with the other game, between Benfica and Dinamo Kiev, finishing 0-0.

It is now 13 months since Bayern ruthlessly exposed the growing frailty at the heart of Barcelona, putting eight past them in one of the most eye-opening Champions League knockout games in recent memory.

Little did Barca know that things would only get worse for them in the months to follow, with a perilous financial situation bringing about the departure of Messi to Paris St-Germain this summer.

They now look a shell of a once great side – sleepwalking through the motions and vulnerable to being easily brushed aside by any side with a plan and talent, or a world-class one playing in third gear as Bayern were here.

Messi started up front with Luis Suarez in that 8-2 loss in 2020. On Wednesday, Barca paired two former Premier League failures in Memphis Depay and Luuk de Jong, and that was largely because ex-Middlesbrough forward Martin Braithwaite is injured.

Not that it mattered as Bayern cut the supply, left the home forwards adrift, set about pressing high, and patiently picked apart a defence designed to be a three but more often pushed into being a five.

Bayern are in something of a transition phase of their own, with their immediate solution to a departing manager and aging parts of their squad being to recruit the best bits from nearest domestic challenger RB Leipzig.

In new boss Julian Nagelsmann they have a man whose ideals make for an easy handover from successor Hansi Flick.

The 34-year-old has the talent and the tools to make this Bayern side a real challenger for the Champions League this season. If this is them in third gear, imagine when they hit fifth?

They are now undefeated in 19 European away matches – a record run in all European competitions – and will surely only get better.

As for Barca, they are stalling and it is hard to see how they get themselves back on track. Second place in Group E is far from a sure thing.