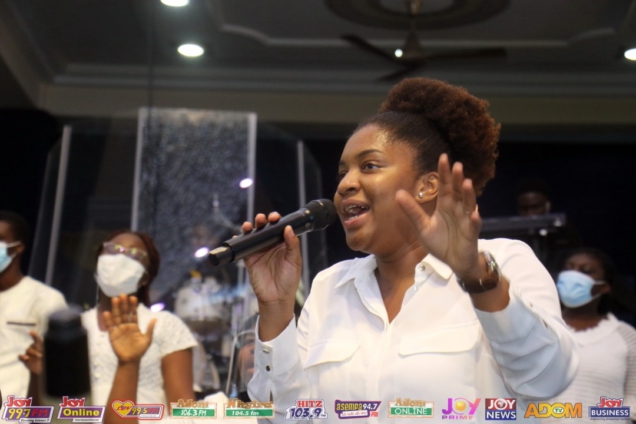 It was an expression of palpable joy and gratitude at the Action Chapel International this Saturday during Multimedia Group’s annual thanksgiving service.

Indeed, the Multimedia Group has a lot to be thankful for. With 25 years in the industry as a major forerunner, the Group has shaped the landscape of Ghana’s media; setting the standards that others follow.

Accordingly, Multimedia held a church service on Saturday, January 16 at the Action Chapel International (ACI) to thank the Lord for His unwavering faithfulness throughout the years.

Dressed either in an all-white attire or in the Group’s 25th anniversary fabric, employees of the group came together in jubilant praise in the auditorium of ACI, dancing to the ministration of the Multimedia Choir.

The Presiding Archbishop and General Overseer of ACI, Nicholas Duncan-Williams was present to share words of encouragement and affirmation for the Multimedia Group for staying its course as a media powerhouse.

“I take the opportunity to celebrate every one of you, the Multimedia Group and your CEO, Mr Kwasi Twum for how far God has brought you. Over 20 years ago, he had a dream; a dream to give birth to what we are experiencing and celebrating today.

“Against every odds, and against every contradiction, against different regimes and against the coming and going of political parties and governments, this organization has stood the test of times.

“I find that to be a very healthy thing and I want to commend you for that,” the Archbishop stated.

Not only did he praise the Group’s commitment to doing what was right regardless of the changing political scenes in the country, he was also particularly impressed with the Group’s decision to set a day aside in media house’s calendar to acknowledge the Lord’s goodness and faithfulness to their cause.

Making reference to Luke 17:11-19 in Scripture, where only 1 leper out of the 10 returned to give thanks to Jesus (after all 10 had received their healing), Duncan-Williams praised the Multimedia for the initiative to hold an annual thanksgiving service and pronounced the blessing of “wholeness” on the Group, just as Jesus had done to the 1 leper.

Present at the event was Mr Kwasi Twum, Multimedia’s CEO who praised and rewarded the hardworking efforts of the Group’s workers.

Several friends and clients of the Group’s also joined in the Thanksgiving Service. Notable among them were the MD of Enterprise Life Insurance, Mrs Jackie Benyi, CEO of Stepfos Enterprise, Mr Bright Agyakum, CEO and the CEO of JL Danquah Herbal, Mr Joseph Danquah.

Others were the President of the International Advertisers Association, Mr Joel Nettey, the Managing Director of Dash Ridge Hauling Services, Lambert Leslie and many other.

For 25 years, it has been truly Christ at work.