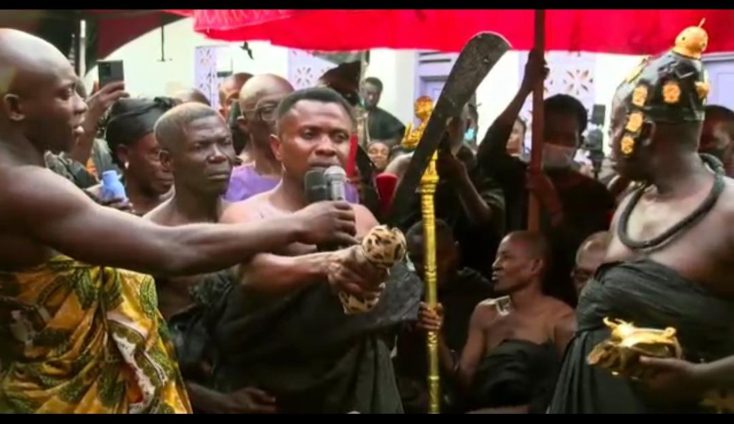 Legendary Highlife musician, Kaakyire Kwame Appiah, has been enstooled the Benkumhene of Bosomtwe Asaman in the Ashanti region.

After going through the customary rites, the Chief was out-doored and presented to the larger family/clan and the entire Asaman township in a colourful procession through the principal streets in a palanquin.

Nana Trimude, the Benkumhene, is expected to be the caretaker of Lake Bosomtwe, the only natural lake in Ghana.

He says he will use his influence to woo investors to turn around the tourism potentials of the lake.

“I thank God for making this a reality. I will do everything possible to make Lake Bosomtwe a preferred destination for Tourists. Together with my elders, we will woo investors to turn around the potentials of the lake”.

Former Member of Parliament of Asante Mampong, Francis Addai Nimo, is expecting accountability and transparency in the reign of Nana Kaakyire Trimude.

He believes this will go a long way to make a positive impact on his regime.

“He should be a servant and use his influence as a musician for development. He should lead with truthfulness, transparency and make the development of Asaman,” Francis Addai Nimo urged.

“The Lake Bosomtwe belongs to us; he should use his influence as a musician to help us develop the lake Bosomtwe to uplift the image of the community.

“He should bring the same crowd that came to support his enstoolment whenever there is a durbar for development so they can also support.”