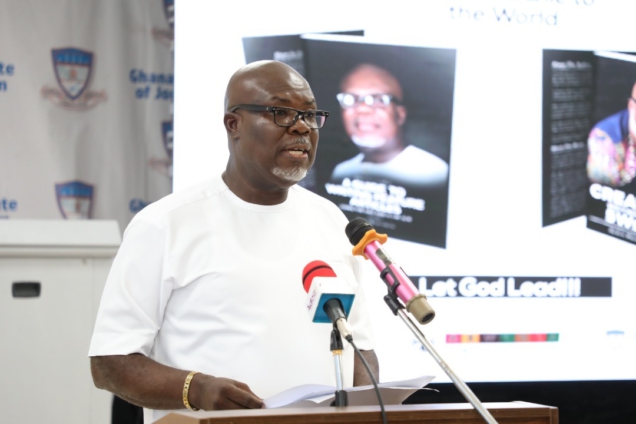 An editor at MyJoyOnline.com, a subsidiary of The Multimedia Group, Eric Mensah-Ayettey has launched two books aimed at enhancing the writing skills of communication students and practitioners.

The books are ‘Eric’s Diary: A Guide to Writing Feature Articles Using The 5ws And H + M, O/R’ and ‘Eric’s Diary: Creatively writing with the 5Ws and H’.

At a launch at the Dzorwulu Campus of the Ghana Institute of Journalism on Tuesday, June 28, 2022, the two books were officially outdoored for public patronage.

Delivering his speech, author of the insightful materials, Eric Mensah-Ayettey, expressed gratitude to God about the success of the initiative.

Flanked by his wife, Joy Awula Dede Sackey Ayettey, the communications practitioner for the past 25 years indicated that as a writer, he had identified the struggles many people go through in putting their thoughts into articulate expressions.

According to him, even though a lot of people desire to also write, they find it difficult composing their thoughts and producing it into meaningful scripts.

Ericus, as affectionately called therefore said this compelled him to put together the two educative materials.

“Throughout the 25years I have worked as a communications practitioner, I have observed that most people have difficulty in writing. From simple official letters, through press statements, policy briefs, fact sheets, rejoinders, position papers, speeches to mention a few.

I realized that most people struggle to convey the meaning they have in mind, on paper. My real diagnosis is that many do not have a grasp of the rules of grammar. That’s mainly because they don’t read. Neither do they listen to good English”, he explained.

He continued: “This calls for more work to be done at the primary and secondary school levels. I urge teachers at these levels of our educational system, to evolve the right pedagogy methods to change this situation.

As a communications practitioner, I believe I can contribute to improve the situation by offering some guidance to all persons whose work involves writing. Secretaries, Administrators, Lawyers, Journalists, Public Relations Practitioners, Students of journalism and Public Relations, among others”.

In his address, he underscored the relevance of books, and charged all persons to patronise the the two books accordingly.

“I have no doubt, that the objective of the book, which is, to contribute to existing literature on writing skills for both students and communications professionals, will be achieved. Indeed, as suggested by the author, I found it to be useful for persons whose work involves writing in any form, as well.

As Eric signs off on each of the articles, I wish to urge each and every one of us to let God Lead in all our endeavours. He will never forsake us”, he said.

On that note, he said, “I on behalf of the Anglican Communion and in my capacity as the Bishop of the Diocese of Accra, in the name of the Almighty God, hereby declare these books duly launched. May the Almighty God bless the hands of Eric and grant the heart desires of all those who support this worthy cause”.

The launch was attended by students of journalism, journalists, public relations practitioners, media owners, media regulators, as well as the author’s family and friends.

Mr. Mensah-Ayettey added that he intends to use the proceeds from the sales of the books to further his education to enable him lecture at the university level.

In this book, the author explained how the 5Ws and H in news writing, as well as his addition – M, O/ R (Who, What, When, Why, Where and How as well as Motive, Opinion/ Recommendation) are used to write educative, entertaining informative and promotional feature articles.

The title, Eric’s Diary: A Guide to Writing Feature Articles stemmed from the style adopted for writing those articles. The author commented on socio-politico-economic issues from his personal experiences. This enabled him to infuse traditional wisdom and local language to spice the write-up for readers’ enjoyment.

In here, the reader is guided through the imaginative process deployed to produce the nine articles- five entertainment-related and four politico-socio-economic ones.

Using the 5Ws and H, the reader is let in on how the entertainment-related pieces were imagined, conceived and birthed as well as how the politically-inclined ones were narrated creatively.