Naked gunman kills four in the US

A nude gunman has killed four people at a Waffle House in Nashville in the US state of Tennessee, police say.

The man burst into the restaurant at 03:25 (08:25 GMT) in the suburb of Antioch and opened fire with a semi-automatic rifle.

Two other people were wounded. One of them wrestled the weapon from the man, who then fled the scene on foot.

Police are hunting for the suspect, whom they identified as Travis Reinking, 29, from Illinois.

He was arrested last year after entering a restricted area near the White House, Nashville police spokesman Don Aaron said.

James Shaw Jr, the customer credited with saving lives by seizing the gun from the killer, has told US media he does not feel like a hero because "it feels selfish".

Arriving in a pick-up truck, the killer shot two people outside the restaurant, before firing more shots inside, Mr Aaron said. 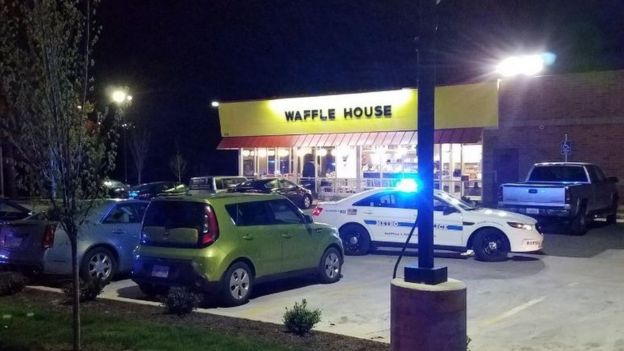 Three victims died at the scene and the fourth in hospital.

Police say he was naked except for a green jacket, which he shed as he left the scene.

The suspect was later spotted in woodland wearing black trousers but no shirt, police say.

Similar rifles were used in the Las Vegas shooting last October that killed 58 people, and the Florida school attack in February that left 17 students and staff dead.

Investigation on going at the Waffle House. Scene being processed by MNPD experts. This is the rifle used by the gunman. pic.twitter.com/lihhRImHQN

How did Mr Shaw intervene? 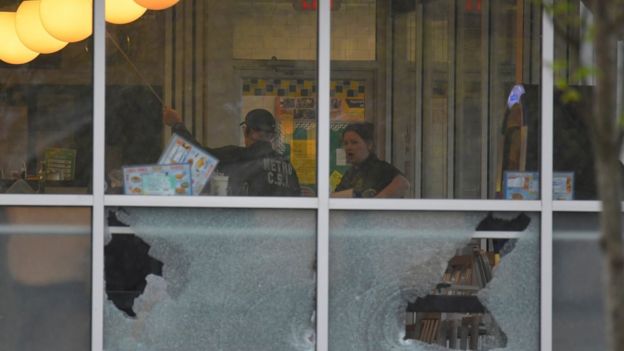 At a press conference on Sunday, Mr Shaw said he had heard gunshots and glass smashing as people ran for cover.

He then hid in the restaurant's toilet area but the gunman shot through the door, injuring his arm.

"It was at that time that I kind of made up my mind – because there's no way to lock that door – that if it was going to come down to it he was gonna have to work to kill me," he said.

When the firing stopped and the gunman was looking at his weapon, Mr Shaw rushed him and a scuffle ensued.

"I hit him with the door and the gun was kind of jammed up," he said. "I grabbed it from him and I threw it over the counter top."

He then forced the gunman out of the restaurant.

James Shaw, Jr., you may not feel like a hero, but we thank you for your action in a moment of terror anyway. ðŸ™‡”â™€ï¸ https://t.co/18IjQMDhzA

"You don't get to meet too many heroes in life but you are my hero," he said.

While being treated in hospital for his injury, Mr Shaw was told by a girl that he had saved her life.