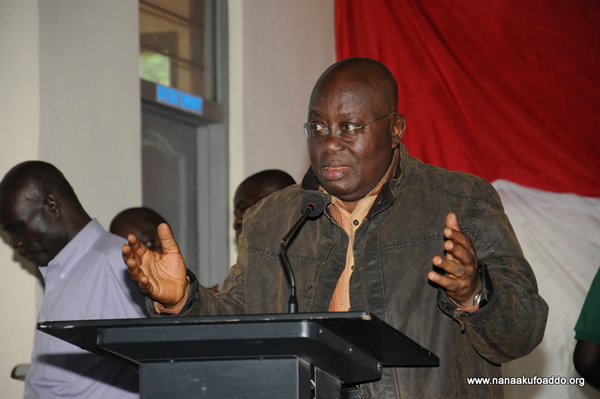 Presidential candidate of the New Patriotic Party Nana Addo Dankwa Akufo-Addo says his party in government in 2017 will revive the agricultural sector to employ more youth.

According to him, the huge youth unemployment rate in the country can be tackled in the agric sector by providing the enabling environment to help the country grow.

Nana Addo also promised to work with the youth to stabilise the economy and clamp down on corruption.

He was speaking at the 15th Anniversary of the Tertiary Students’ Conference (TESCON) in Accra.

An Akufo-Addo government, he said will reverse the decline in the country’s support for agriculture, which has been one of the greatest deficiencies of the Mahama era.

“On the back of an expanding and diversified agriculture, we will set Ghana on a solid platform for industrialisation, which will see economic growth matched by job creation. You know we can do it,” he added.

In order to achieve the realisation of these, Nana Akufo-Addo urged members of the youth wing, in addition to the entire membership of the party to “put our hands to the wheel and drive the change we seek through the challenges that await us in 2016.”

“We will get there”, he assured, stressing that “hope is coming. Change is on its way. Ghana can work again. But, if we are to bring back hope; if we are to set straight your future; if we are to get you back to work, then we must first win power. And, if the NPP will win power will depend on your energy, your commitment to convincing as many people as you can to vote for change. You can make it happen.”

Key amongst several policy initiatives which will be implemented under his government to address the concerns of the youth, Akufo-Addo said, will be investing in the nation’s institutions of learning to acquire new technology to provide skills and education to the nation of young people who are being left out of the job market.

“No nation can afford to marginalise the youth, the very group that makes up the chunk of its labour force. This is something we expected leaders to know. We will be learning from Germany, which has a relatively low level of youth unemployment, to prioritise high-quality vocational courses, apprenticeships and links with industry,” he said.

He continued, “your next NPP government will be a government that promotes policies that add value, because that is the only way we can create a large pool of sustainable good jobs with good pay.”

Additionally, the NPP flagbearer stated that his government will make agriculture attractive to the youth.

With total export value of Ghanaian agriculture standing at $2 billion largely from cocoa exports, in comparison with Cote d’Ivoire’s $12 billion, Nana Akufo-Addo explained that Cote d’Ivoire’s success is because of appropriate policy, executed with discipline.