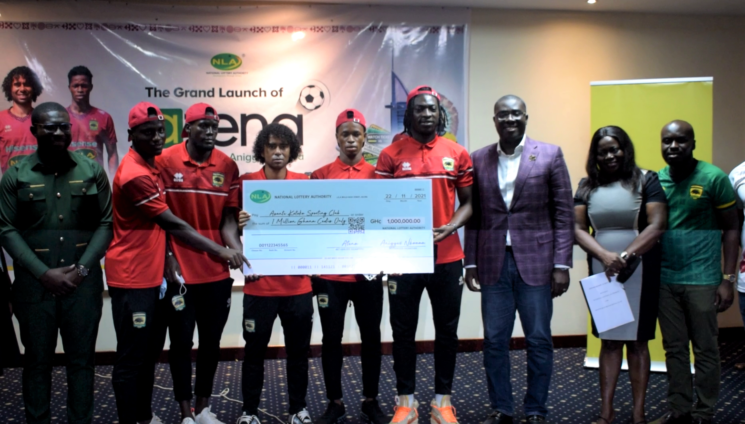 The one-year sponsorship deal, worth ¢1 million was officially announced on Monday, November 22, 2021, at the Golden Tulip Hotel in Kumasi.

The partnership agreement is expected to run for the entire duration of the 2021/22 Ghana football season but subject to renewal.

In the coming days, the NLA will announce a similar package with giants Accra Hearts of Oak.

Speaking during the launch, Director General of the National Lottery Authority Mr Samuel Awuku disclosed, a number of Ghana Premier League clubs approached them with their respective proposals but the NLA was convinced, Kotoko and Hearts of Oak were willing to go through the process with them.

Along the line, RTU felt that we were delaying and they had already gone into printing their jerseys for the 2021/2022. Kotoko and Hearts were very patient and they were willing to go with us through the process.”

He continued that, “We needed to align on the figures, we needed to know what we were getting involved with and we also wanted to be sure that this was a deal worth going into.

We concluded on everything last Friday and today, the Board gave us the approval to come and sign Kumasi Asante Kotoko’s partnership deal and by the arrangement, we will sign Hearts for a week from today,” he finished.

During the event, the NLA unveiled a new online lottery dubbed ‘Atena Game’ for fans of the Ghana premier league.

This game gives football enthusiasts an opportunity to pick five jersey numbers every week with the lucky winners after the draw set to be given items like jerseys, matchday tickets, fuel coupons, cars, electric appliances and cash prizes.

Communications and Brands Manager of Asante Kotoko, David Obeng Nyarko, explained why there is the need for fans of Kotoko to patronize the initiative from the NLA in order to make sure the state agency benefits from the partnership.

“That’s the way we have to push our brands, we have to push the other brands that are partnering with Asante Kotoko. So there will be better explanations and details coming out very soon.

“All we want to say is that, we admonish our supporters to patronize this particular product that’s the ‘Atena Product’ whereby we are going to use the jersey numbers of our players to predict the lucky numbers and the lucky fans are going to win so many wonderful prizes. So it’s a package that we have to patronize fully,” Obeng Nyarko stressed.