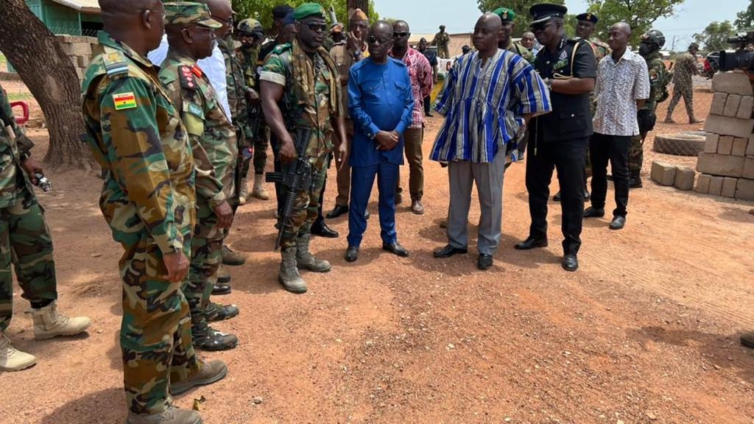 The National Security Ministry has commended Military personnel deployed to the Northern region for their commitment towards the fight against terrorism.

Mr Albert Kan-Dapaah said the personnel have not let the country down.

“The personnel of the Unit have stayed true to their constitutional mandate to protect the territorial integrity and sovereignty of Ghana at all times,” the Minister noted in a statement from the Ghana Armed Forces after a high-powered security delegation’s visit to the 11 Mechanised Battalion Area of Operation in Bawku and Mognori Detachments in the Upper East Region.

The visit was necessitated by the emerging threats of terrorism along the northern frontiers of the country and national efforts against the threats.

Mr. Kan-Dapaah said the Government was aware of the challenges the personnel faced and the efforts that had been made to deliver the necessary resources to enable them to work effectively and efficiently.

The Minister encouraged the personnel to remain professional, hardworking and vigilant and continue to protect the northeastern frontiers of the country.

Lieutenant Colonel Minta-Agyemang, the Commanding Officer, 11 Mechanised Battalions, briefed the Minister and his entourage on the operations, training, and logistical matters in the operational area.

The Ghana Armed Forces and some sister security services have embarked on several counter-terrorism training exercises and operations with the collaboration of their international partners in recent years to deter and rid the country of any terrorist element or threat while protecting the citizenry and national assets.

The delegation visited Pulmakom Detachment to ascertain, firsthand, boundary issues with neighboring countries and the total welfare of troops.

DISCLAIMER: The Views, Comments, Opinions, Contributions and Statements made by Readers and Contributors on this platform do not necessarily represent the views or policy of Multimedia Group Limited.
Tags:
Military
National Security Minister