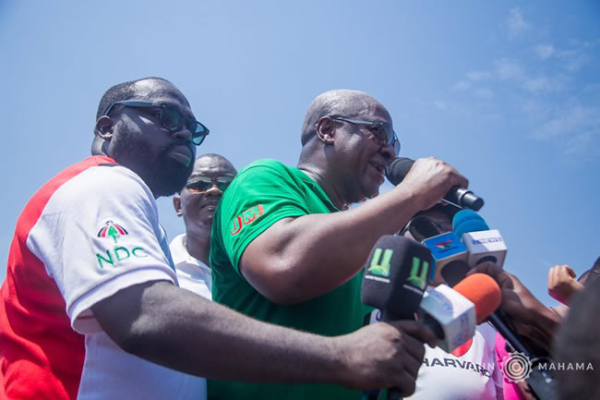 “It is a worthless cause”, Kweku Baako said on JoyNews news analysis show Newsfile Saturday.

Aisha Huang after years of impunity was arrested in May 2017 and deported in December 2017 after the state discontinued prosecution.

Photo:Aisha Huang (second from right) faced three criminal counts in 2017 but has since been set free.

Public discontent over the failure to prosecute followed but died down until Senior minister resurrected the controversy in April 2019 during a government interaction with Ghanaians in the US.

In response to a question over the failure to prosecute the infamous Chinese ‘galamsey queen’, Yaw Osafo Maafo discounted the importance of seeking justice and directed attention to the benefit of Ghana-China relations as seen in a $2bn deal to provide much-needed infrastructure.

His viral comment has been roundly condemned by leading politicians, civil society groups and Ghanaians as gauged on social media. Made on April 14, 2019, the comment has remained topical two weeks running.

The NDC has not failed to put a knife in, assessing the minister’s comment as a government posture towards the Chinese government and not merely a personal view.

“It can be reasonably deduced from the Senior Minister’s comments that at the centre of Ghana’s bilateral relations with China is an obscene willingness on the part of the Akufo-Addo government to condone plain criminality and flagrant disregard for the laws of our country in exchange for money, an “appalled” NDC has castigated.

Taking the issue a step further, Minority spokesperson on Foreign Affairs Okudzeto Ablakwa has announced on Newsfile, that “the future NDC government will trigger extradition processes for Aisha Huang to be brought back, face our laws and be prosecuted.”

He said he had the permission of the party and its 2020 flagbearer John Mahama.

Veteran journalist Kweku Baako said he found the promise as an attempt by the NDC to make partisan capital out of a disappointing turn of events.

He explained Aisha Huang who has also been accused of murder was not the only Chinese national to have been deported.

In 2013 between June and July, 4,592 Chinese engaged in illegal mining were deported in what he said was permissible practice in immigration.

Like Aisha Huang, some of these Chinese also committed murder during their deadly scramble for Ghana’s natural resources that saw them destroy water bodies and heavily pollute the environment.

Kweku Baako argued, the Chinese government would want to find out why the NDC would single out Aisha Huang for extradition.

“Who? Chinese are going to collaborate with you? “They will never give you Aisha”, he said emphatically.

“It is worth a try” Okudzeto Ablakwa remained defiant.

Aisha Huang was deemed untouchable during the NDC government but was first put before court following a change in government in 2017 after an operation led to her arrest.