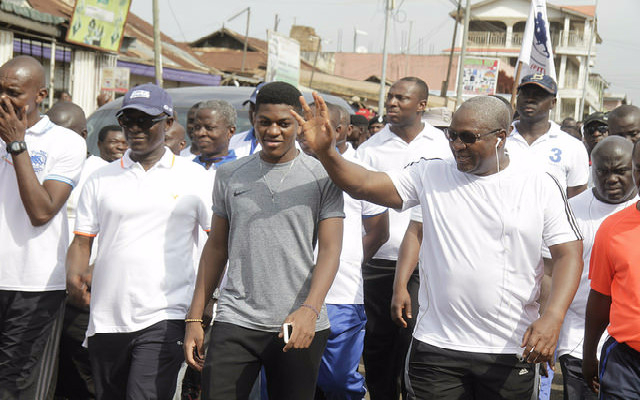 The walk which was also supposed to feature the top executives of the party Saturday was cancelled in solidarity the Manhyia Palace following the death of the queenmother of Ashanteman, Nana Afia Kobi Ampem.

The walk which is the first of its kind was to feature the entire hierarchy of the party and serve as a final trigger of awareness ahead of the elections.

The Manhyia Palace officially announced the death of 111-year-old queenmother who reigned for 39 years.

Information from the Manhyia Palace will perform her one-week rites on November 24 in accordance with Asante custom and traditions.

It has, therefore, placed a ban on all funerals, drumming and noise making throughout the Asanteman kingdom until the funeral of the late queenmother has been performed.

The party says it respects the ban on noise making, drumming and dancing and mourns with Otumfour on the demise of the Asantehema.

Former Mayor of the Garden City and organiser of the walk, Kojo Bonsu, told Joy News correspondent Erastus Asare Donkor that even though the party's supporters were not in agreement with the cancellation, the traditions of Manhyia Palace must be upheld.

"It is being postponed indefinitely because we don't know the arrangements of Manhyia Palace," he said.